Thursday morning, March 29, I woke up at 4:15, went down to be sure Sam was awake.  He was, and looked handsome dressed in a dark plaid shirt and tie, suit pants and a dark coat.  He had to be at the school for the 5:00 bus departure.  He was heading to Layton for a FBLA conference.

Sam I am proud of you for packing your own suitcase, looking after every detail, signing yourself up for something I have never even heard of, growing into your own amazing person.


I drove home and tucked myself back into bed next to William for another hour.  And then the morning started again.

As the children began to gather in the kitchen, there was the typical scenario.  Grant and Olivia both had something to tell me. Neither wanted to wait so I tried to listen with both ears.  Grant's was a line of questions.

"Mom, do baby bunnies get cold?"

"So when they get cold, do their moms make a nest to keep them warm?"

"Do they pull off their fur and gather it around the baby bunnies?"

"So is that what all the white stuff is around the baby bunnies?" He asked.

"Yes, we do." He said with a satisfied smile. 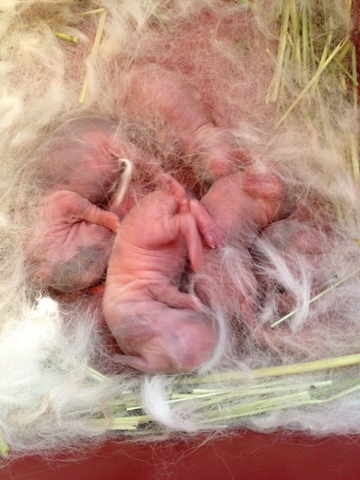 for a moment we were functional

Something is the matter with the refrigerator. The meatloaf I pulled out for my Sunday lunch was covered in mold. I would have thought, under normal conditions, it could have lasted at least a week. The last of our bread also turned up spotted with white spores Sunday afternoon. That discovery was made after I had just finished an admittedly dry peanut butter and honey. Which makes me gag when that happens. The moldy bread was no fault of the cupboard however. It’s just that it was the bran bread and Granty only likes the white, fluffy “church bread,” one of the dangers of organized religion, so the bran bread sits and goes bad.


So Monday morning I woke up and the bread and cereal cupboard was all but bare, since no one eats the oatmeal, so it might as well not be there. And I went down to the laundry room, which is my normal routine, where I had to admit to myself that something is also the matter with the dryer, as the towels required a third cycle, and I felt bad that I will have to call Granddad, the landlord, and talk about these inefficiencies, wishing I could be more self-reliant. Everyday a step closer. Am I right?

But Olivia woke up productive, as usual, and when I suggested pancakes, she got out the griddle herself and we mixed up the batter, and as Ben came down the stairs he said “Olivia, those pancakes smell great.” For a moment we were functional. I could smell the blueberries cooking too. It did smell great. It smelled like a cozy morning. This was just as I noticed that there were, forming outside, some lovely grey, heavy clouds, and a strong wind blew in. There was even a grocery bag stuck to the tree in the front yard. Production Value! And it started to rain a little bit, but everyone was intrigued by the cozy, comforting smell of the pancakes. We felt like a fortress.

Olivia you intrigue me too.

She knows her multiplication facts now. I can hardly believe she should be that old. And she made breakfast for everyone.

We have become rabbit owners. I bought Kyle a rabbit for his birthday, which he named Cocoa. She is sometimes affectionate and sometimes what you might be tempted to call aggressive; probably just defensive. The kids were theorizing that maybe Cocoa came to us pregnant, and that’s why she has been a little nasty at times. Which made me wonder a bit about myself, since I have been pregnant for the better part of their lives. And she has a voracious appetite for cabbage. It is a good thing we bought her around St. Patrick’s Day, or we might have never discovered that.

Kyle is a good rabbit owner, and if he is not the first to tend to the rabbit after school, it is Olivia. I wonder what she will become. She is a nurturer and a natural caregiver. And she is good at math. So maybe she will be a nurse. Or a vetrinarian. It is a blessing to be here watching them grow. They are all their own universe, and I am here to be perplexed, confounded, endeared, and so often amazed. 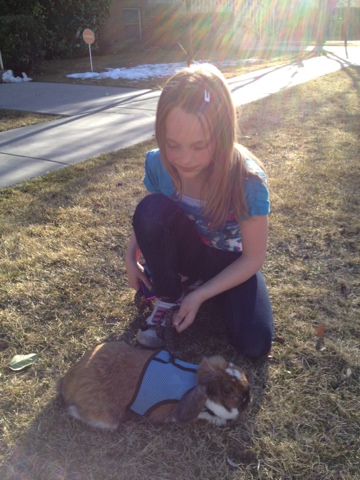 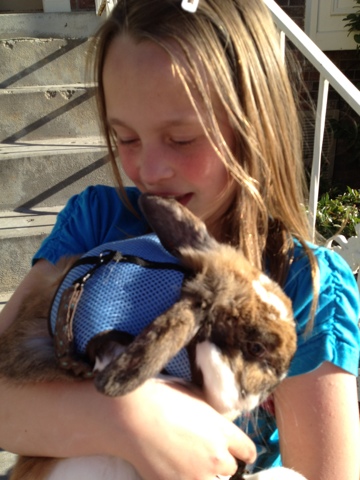 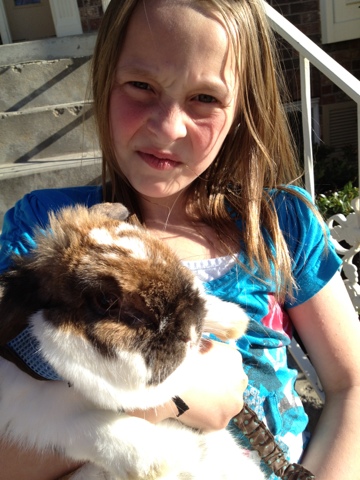 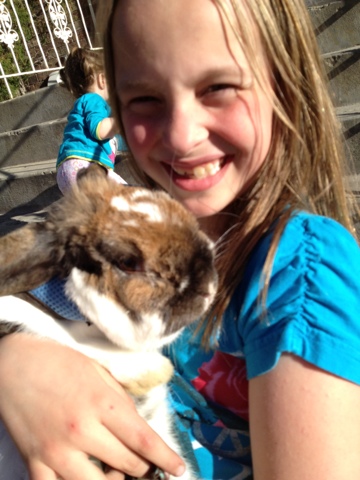 I don't think you believe me

Kyle, I don't think you believe me when I tell you that you were my easiest baby. Even in birth you seemed to be unwilling to trouble. In that sunny hospital room, on a morning in March, I listened to the swoosh of your heart beat, noticing it get more and more faint, as it seemed to travel downward, and I could actually see you wiggling yourself away from the device, and underneath the monitor belt. You were working your own way into this world.  The doctor recorded minutes pushing: zero. 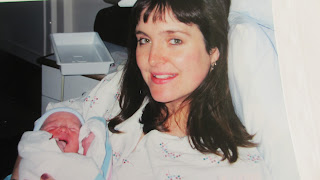 In your Father's Blessing you were gifted with a light that would be a joy to your brothers. And you were the first thing to stir them from their two and three-year old worlds of egocentricity. 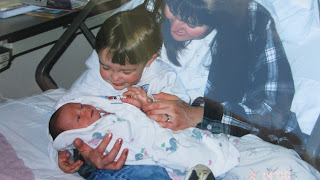 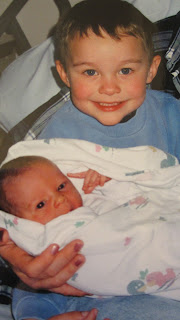 When we brought you home they surrounded you and brought forth offerings of Hot Wheels and Thomas the Trains.  They couldn't wait to include you. 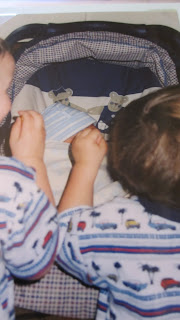 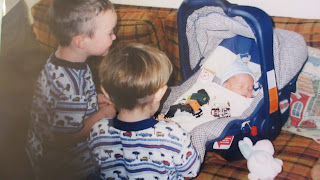 You were an easy tempered, sweet natured infant, and remained surprisingly so as you grew. A natural third child, you were the one to endear and entertain with your whimsical humor, 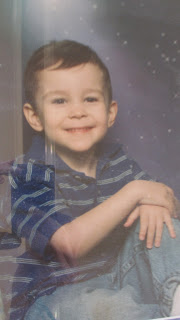 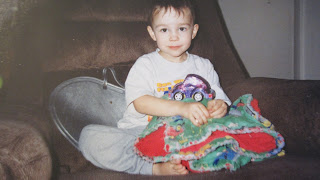 and your affectionate spirit. 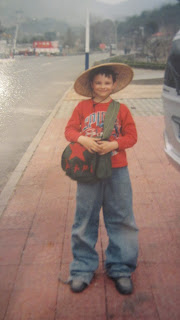 You have grown in so many ways since we left China, two years ago. 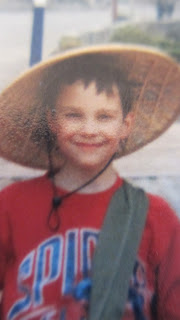 Even though you never loved transitions, you have risen to the occasion and become the strong arms that your little sister reaches for, and I am so proud of you.

I hope you had a fun birthday.

If I had a list: Favorite things about being a single parent,
at the top would be Boys Night Out...particularly that I get to go.
I'm not sure what would come after that. Possibly not much. 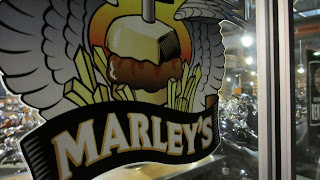 Friday night the girls had plans with Grandma Martha, so the boys and I went to Marley's Gourmet Sliders. Marley's has two locations, one at the Shops at Riverwoods, and the other at the Harley Davidson dealership, out at the old Geneva Steel site. Riverwoods would have been an easy walk, but the Harley Davidson location has been an I-15 landmark and curiosity over the years, and now that my five boys of all ages are old enough to be passionate about Harleys, the drive to Lindon seemed worth it. I have to admit, I half-expected to walk in to Pee Wee Herman and the Hell's Angels,  and was marginally disappointed to just find great vintage atmosphere, and other (ahem) normal families enjoying the amazing selection of  burger joint food. 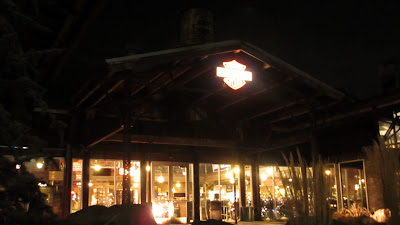 And while I had made the little boys excited about the adventure out to see the motorcycles, only to fall behind schedule and arrive after the dealer and gift shop closed, I was not to worry. Marley's was open till nine, the lights were on in the shop, and while we waited for our food to arrive, the kids were able to press their noses against the big glass windows, and peer in at the motorcycles, and Harley Davidson gift items, from baby onesies to leather jackets, to curious.  I congratulated myself for arriving after hours, avoiding bringing to reality the nightmarish image that had struck my mind as we'd approached: William, motorcycles, and the Domino Effect. 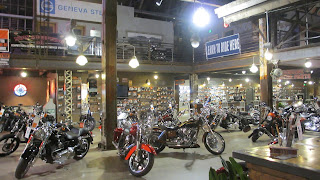 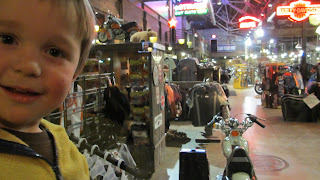 So here he is from the picture window in the restaurant. Fun window shopping. And we were all still smiling. 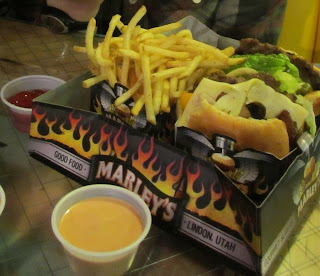 Marley's offers an extensive menu and deciding necessitated some education. What is a slider?  How many do you need to order? And what to choose from the thirteen different free toppings, including  my favorites, bacon, mushrooms, avocado, and Sam's choice, jalapenos? And what about the nine sauces? Cranberry, Spicy buffalo (Ben's favorite), or Bleu Cheese spread.  Our friendly cashier was exceptionally patient as the six boys (Kyle's friend included) and I sorted through the options.
So according to my google research, Sliders are by definition small, square, and topped with diced onions. The belief is that they originated on Navy ships and the name refers to the way the burgers, due to their greasy nature, slide off the the grill or slide through the intestinal track, or their ability to slide through your esophagus because they are so small. Yummy. I think I might have liked them better before I knew that. 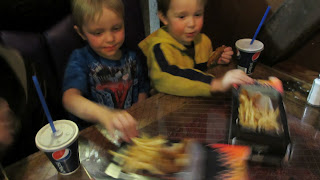 Here are Grant and William, unconcerned about etymology, with their kids meals in hot rod boxes.  They got the chicken strips, which were lightly breaded, uniquely seasoned and served with a delicious honey dill sauce. 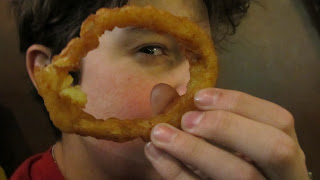 I chose the onion rings--large in size and portion.  There were plenty to share.  And speaking of portions, all of us, excluding Sam, chose just  the combos with just one slider, and were quite satisfied. So they may be small, but they are filling. 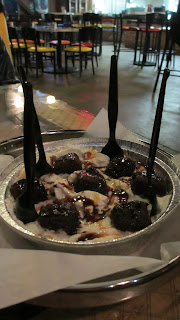 We had just enough room to share The Hub Cap, deep fried brownies, custard, chocolate sauce and whip cream. Topped with a cherry, served in a hub cap. Delicious.
Posted by Megan Raines at 1:11 PM 1 comment: 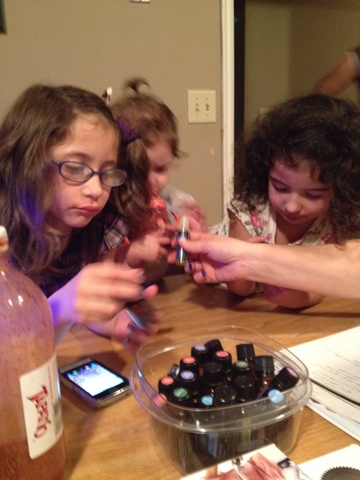 The first Thursday in March, I spent the evening with some new doTERRA friends. We took turns sampling peppermint, lemon, and lavender. The girls all requested foot massages as we finished talking about the essential oils with their mom.  They promised me it would make them sleepy. 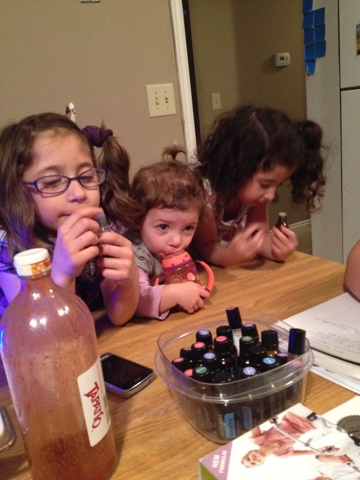 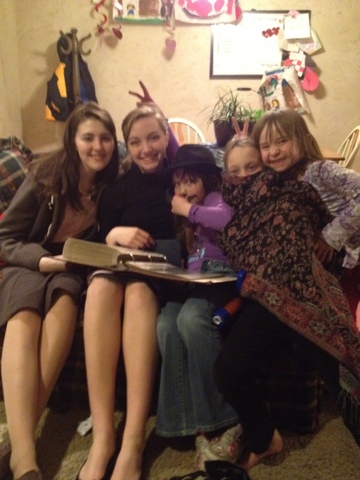 The young men and women in the church paired off and went on out as mock missionaries.  We had two delightful young sisters. We served Italian, and I showed them pictures from my mission in Italy.  After dinner the sisters made a courageous attempt at teaching a short lesson on the restoration of the LDS church.  William and/or Grant were balancing on my head for most of the discussion. Mary was pretending to be the Godfather. Olivia was Pakistani. 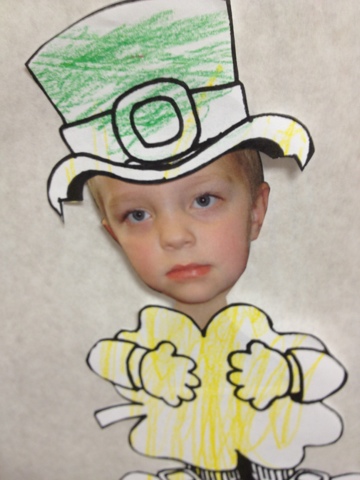 Door decoration at the daycare center. This pictures doesn't match Grant's real enthusiasm for St. Patrick's day.  He is counting the days until the gold coins appear.
Posted by Megan Raines at 12:01 PM No comments: