I think I have mentioned before that A Child's Calendar by John Updike, a collection of poems about the months of the year, is one of my favorite children's books. I discovered it while we were living in Maine, where on most days, we enjoyed the drama of the four seasons. About November John Updike wrote:

The stripped and shapely
Maple grieves
The ghosts of her
departed leaves.

The ground is hard
As hard as stone.
The year is old,
The birds are flown.

And yet the world,
In its distress,
Displays a certain
Loveliness --

I felt a small sense of loss when we arrived at Paul Reams Nature park Thursday evening with bags of duck bread left over from Thanksgiving. For months I have been saving old bread, then throwing it out when I've discovered it too old and green, neglecting to come see the ducks before they became scarce and skittish and cold.

As we pulled in to the parking lot the colorful leaves that I've enjoyed in years before were long gone and we could see right through the branches to the rocks and river below and the bridge crossing over to the park and the duck pond.

I stepped out of the van first to survey and spied three lonely ducks swimming in the river. Hopeful, we unloaded and ran to the pond where we anticipated they would congregate with us. As they approached us, another group appeared out of nowhere, and we imagined that they would do as summer ducks do and join us in the clamor for handfuls of bread crumbs, but with a loud flapping of wings, and a burst of speed they took to the air and circled above us into V formation and left without any interest. They were beautiful in the sky. We had come over prepared and too late. The three little ducks had their fill and waddled away.

I looked around at the bare trees and thought about several years ago when Bethany said she loved the look of leafless winter because you "can see the branches better". It reminded me of John Updike's poem. 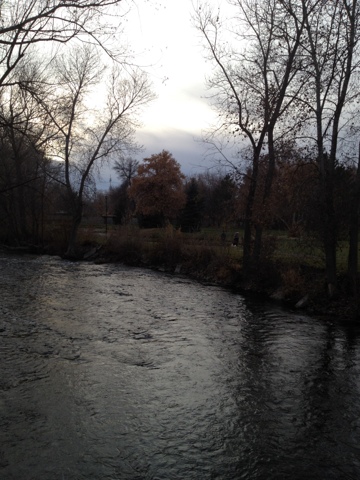 Can you see the ducks there? 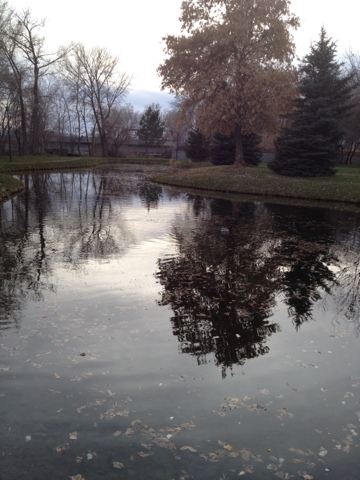 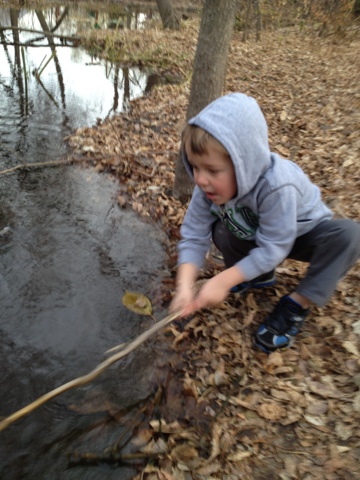 William did some fishing. 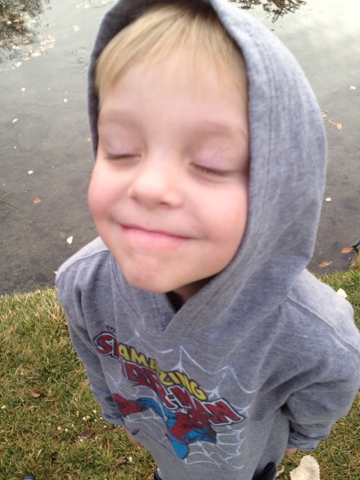 I never tire of taking pictures of Grant's smile. Thursday evening I was standing in the hallway talking to Grant about something that happened before he was born. He was standing above me at the staircase. He said "I know, I was watching you from Heaven."

"What were you thinking?" I asked.

"I was hoping I would get a body."

"And I did!" He said happily. And there was the smile that I love.

After the park we picked up the girls from dance and drove to the middle school for Kyle's musical theatre class performance. Pictures to follow, when I track them down. 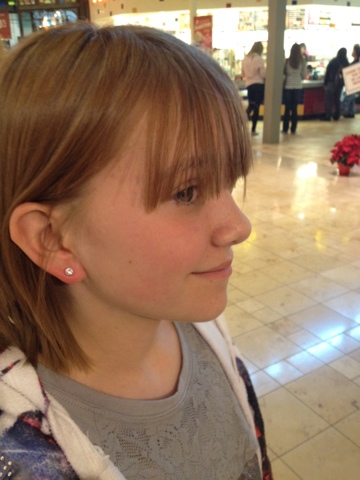 Friday afternoon I took Bethany to the mall to get her ears pierced, as I promised we could do at her eleventh birthday.Then it was back to dance again, pizza night, and bad case of holiday blues...but I am learning that things seem better in the morning.

Saturday I woke up early to meet Granddad at the temple for some family temple work.
It was a gorgeous cloudy morning. 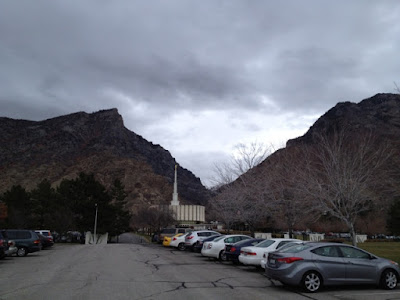 I was grateful to be able to have lunch with the sisters from the ward at a baby shower.
I loved this delicious Brazilian cheese bread 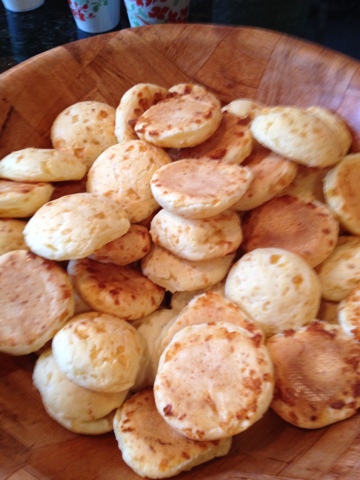 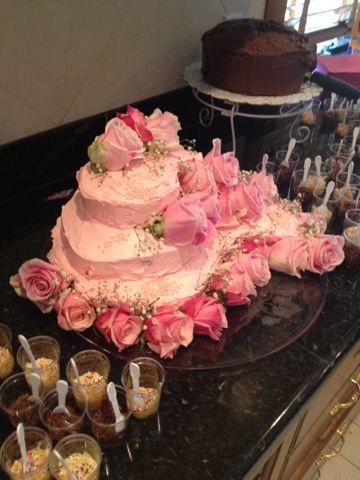 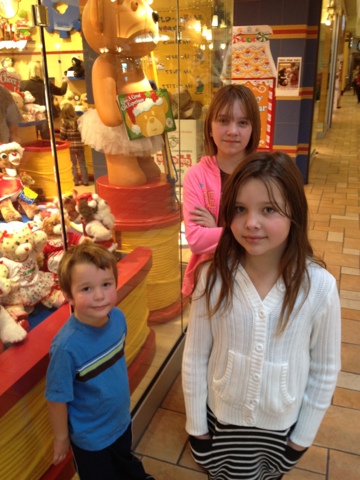 In the afternoon we picked up Bethany from dance and took William to the mall to begin his birthday celebration at Build-a-Bear. Mary helped me convince William that he wanted the chocolate lab. I think Mary has a future in persuasion. 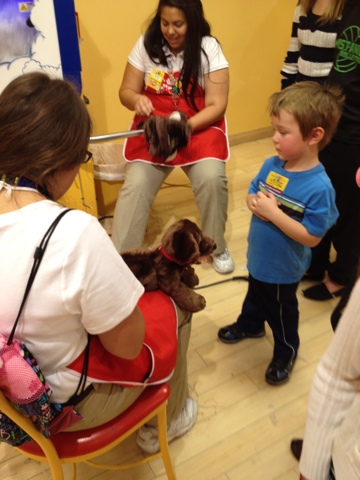 Stuffing and sewing up. 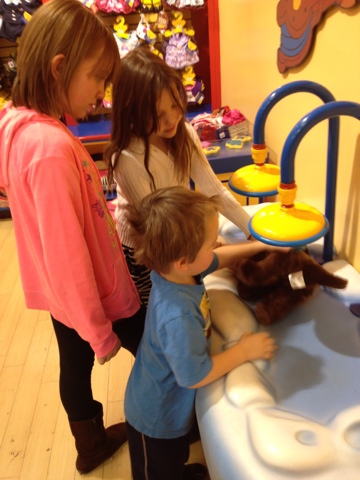 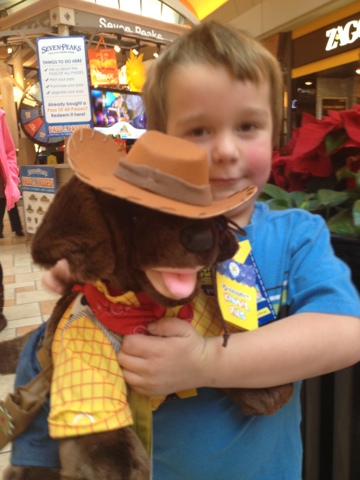 In the evening I started my Christmas shopping with Mary. We saw this beautiful sunset. I wish I were a photographer. It was much darker and the clouds were dramatically bright in contrast. 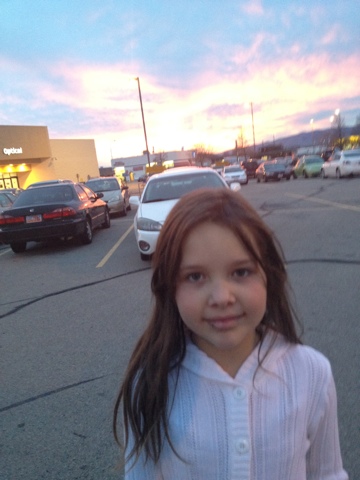 After dinner I drove Ben to a birthday party, practiced the piano for a while, accompanied Mary on a flashlight search for a missing rabbit, picked up Ben.  We stopped back at Smith's at almost eleven, on the way home. I had forgotten the birthday cereal.

Sunday was testimony meeting and wonderful lessons. It had been a long time since I sat through the classes without any children. William had received his birthday candy in primary and was happy without me. In the afternoon, the kids were excited about a visit from the home teachers. It is a blessing to feel watched over, especially at Christmastime.

Olivia made chocolate chip cookies and I helped her deliver them in the rain. She offered to help me with the laundry and did a wonderful job.  At bedtime there was thunder and wind and a steady rain.
It reminded me just a little bit of the winter in Maine Northeasters, when the cold wind was so strong it would knock on the door and seemed as if it might open it.

Thanks for the awesome post, my child also has a poem book with beautiful pics. You have done a wonderful blog and nice pics are well.

Thank you for visiting!