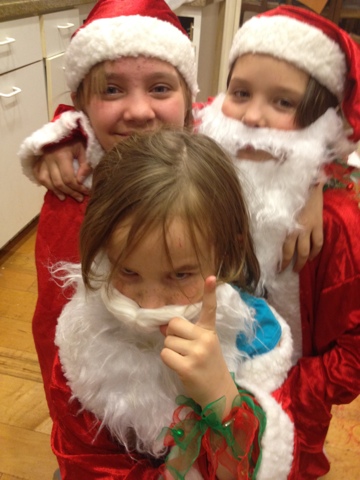 Sunday evening we opened the seven or eight tubs of Christmas decorations. Some Chinese friends gave us these Santa costumes in Guangzhou, about eight years ago, but I think this is the first year the kids have discovered them before I could tuck them away. 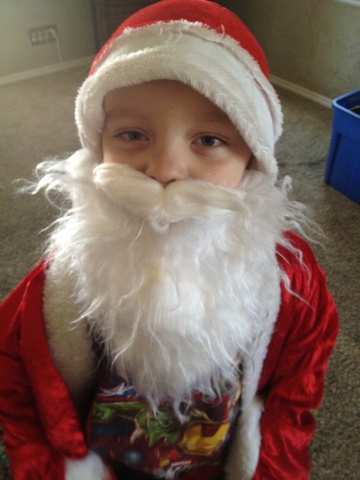 I am not sure why I had them in some kind of safe keeping. Sentimental reasons, I guess.

Guangzhou is the world's crappy stuff market, and at Christmastime, communism takes a backseat to capitalism and a somewhat gawdy sort of Christiany. While we were there the trees frosted in disco colors and garish plastic Santas were a bit nauseating, however after the fact I've looked upon these thinly woven crimson costumes with nostalgic affection.

But even I have a letting go point where the tangible, and fragile, can no longer keep a memory hostage, preventing it from taking life. And at some point our attachment to distant and romantic far away adventures, whether they be in deep distracted thought, or in the form of a treasured keepsake, must become less important and less compelling than the life that is right in front of us, demanding our love and attention, and needing our appreciation 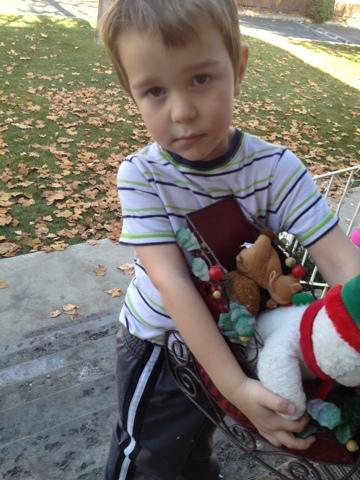 My Christmas decorations don't seem to be staying where they are put, and will probably end up broken, but at least I have a William


So in Guangzhou there is a place called HaiZhu square where we spent many afternoons browsing the hundreds of stalls. The smell was cigarettes and street food, the scent of which wafted from the carts owned by little men outside the square selling roasted sweet potatoes and fried noodles. And in one section, there was the overwhelming unmistakable acrid odor of urine, and it was essential to ex-pat life in China that it become loveable, that let you know right where to find the bathroom.

In the fall, the square was filled with the most ghorry and horrifying take on Halloween costumes and decorations you can imagine. At Chnese New Year it was decked in red laterns and stuffed monkeys, or roosters, or tigers, depending on the year. It was always a great place to shop for take-home-to America trinkets, for birthday party favors, or for cheap toys that you only wanted to last the afternoon.  But if you winded yourself past the endless booths of  hair accesories, and office supplies, into the center of the square you would come to my favorite place, which actually had it's own door and looked like a real shop: the cookie jar vendor.  I fantasized about having a cookie jar for every season.  My mother-in-law bought me a glass ginger bread house that comes out at Chistmas, and I returned to the states with a pumpkin head scarecrow too.  I think he appeared in a post a few weeks ago...but he has since lost his head to King William, and has been sent the way of letting go.

Sunday night I was hit by a bad case of mean grumpy stressed out mom. Maybe it was too many consecutive days of eating pie, or too much Christmas clutter, or the realization that tomorrow was not a sleep in day, or just the single parent at the holidays blues.... Stated that way it would seem almost justified. I promise it had nothing to do with the broken cookie jar.

Monday was better. I am intensely grateful for warm days in late November. The little kids were too tired Monday to wake up for preschool. William had been awake most of the night with a cough and had finally fallen in to a comfortable sleep, so I let the morning stay quiet, as I finished arranging the nativity sets on the mantel, and boxed up the remaining ornaments that I hide away for that year when we have more space, more time, less need to keep things simple.

Before lunch we drove Bethany's cello to school, then went to our park to play without jackets. They thought it was a unique dynamic to drive to our park across the street and park in the parking lot. Sophie wanted to roll down the hill, which was sparkling with the melted frost... Not quite as idyllic as the weeks before when the grass was warm and dry.

"Your turn Momma" she insisted. 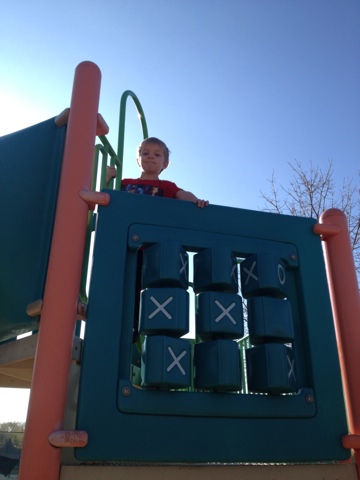 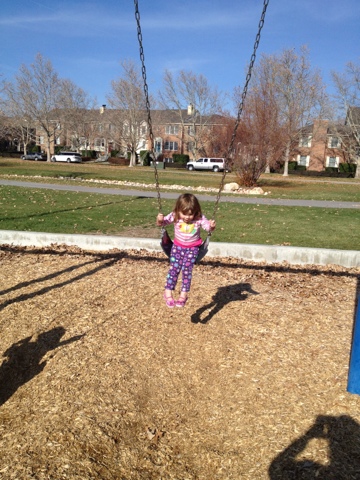 I hate pictures with my shadow in them. But I have that parental need to excessively archive perfect moments with the kids on the swings.

Tuesday morning we got a new faucet in the kitchen, and I made some progress with the laundry piles on my bed and bedroom floor. The afternoon was busy with dentist appointments, dance, sewing which turned out to be cancelled, drove to get a hair cut for Sam which we postponed when we saw the crowd, grocery shopping, shoe shopping, back for dance pick up, home for a quick dinner, and then to an appointment with Kyle. I was grateful that Judith brought us her delicious meatloaf, which made things easier.

Meanwhile our sweet friends from the ward brought us an enormous load of clothing they had outgrown.They were beautiful, designer dresses and shoes, and their mom had ironed them and put them on hangers, so they looked brand new. William claimed a little grey jacket that he insisted said Green Lantern, because there was a G and the letters were green.

There were even things for me. When I looked at the size I thought I wouldn't even be able to stick my arms in. Caitlin insisted I try on a pretty red dress that she had been wearing herself. The girls stood in undisguised disapproval as I presented myself in the dress, which fit, but greatly accentuated my need to find a personal trainer. Fertlilty Goddess Abs. The white cotton socks, and white legs were reportedly awkward as well.

"Maybe with stockings..." They said.

"So I guess I won't wear it dancing just yet," I said.

At which Caitlin brightened and said "Yes! Wear it. Noone will ask you to dance."

To which Bethany sagely added," But if they do, you'll know they really love you for you."

"How about we keep in in the closet for dieting inspiration," I said.

Everyone pledged to monitor my food intake.

Wednesday the school portait people were at the preschool.  William reported that he smiled for "his camera teacher."  The little boys wore their new shoes, and as we arrived home they dashed out of the van, and ran to front door to show me how fast their shoes can run. Sophie ran after them before I could realize that I have no baby anymore.

In the evening, hair cut for Sam, shopping with Olivia, Young Mens.  Caitlin asked me how many pounds I had lost that day. 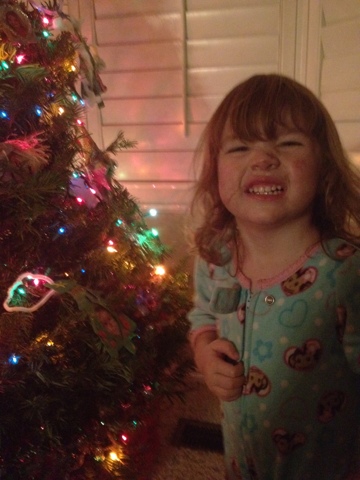 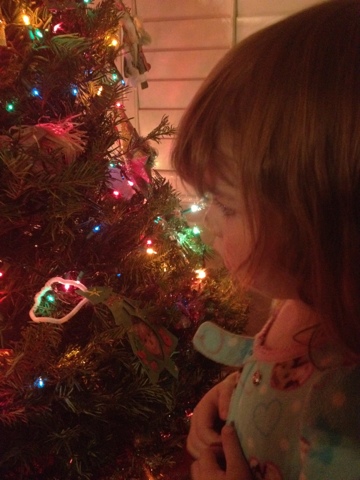 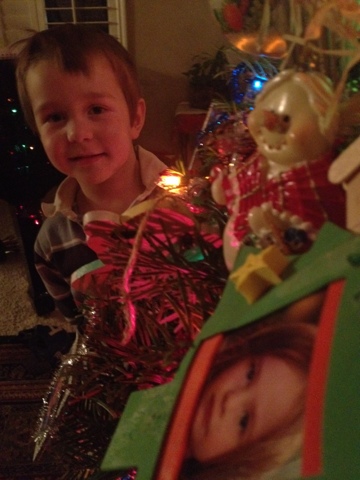 Wow, reading you talk about China made me sad. So many things I miss, but mostly friends like you;) I don't know you you do it super woman! James and I talk about having #5. He doesn't really want anymore but I would really like another girl;) But I don't know if I could handle the reality of 4 boys so I guess we will see. Even if we have more it would be summer before I even think about it. I am still trying to settle into life with no Ayi. Beside being pregnant has always been hard on my marriage so maybe it is for the best not to. Oh well sorry for the long comment. Miss you!