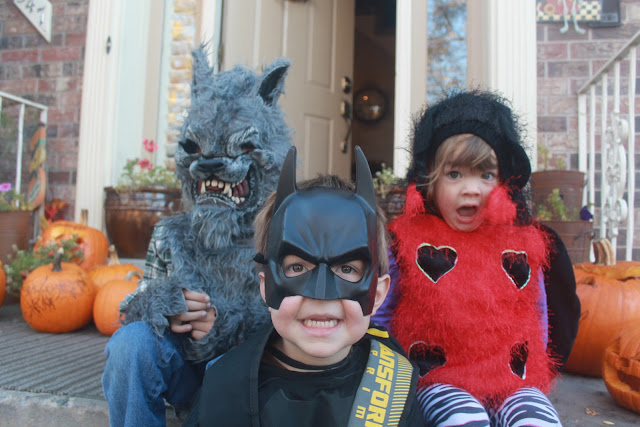 Halloween morning I was grateful for kids that agreed we could be creative this year...code word for let's save money.  They agreed we had a treasure trove of costumes accumulated over the years...and a couple of cans of spray paint are always a good time too. 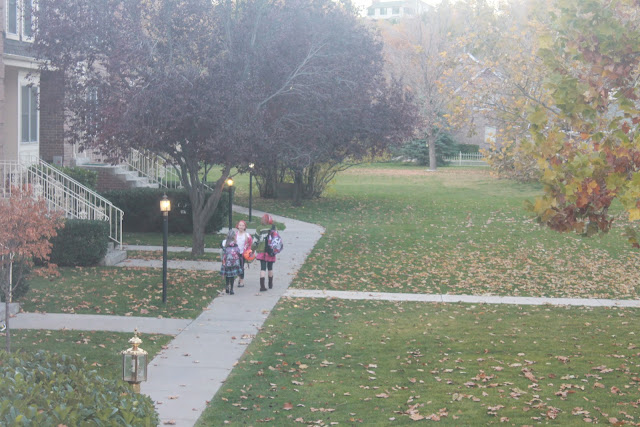 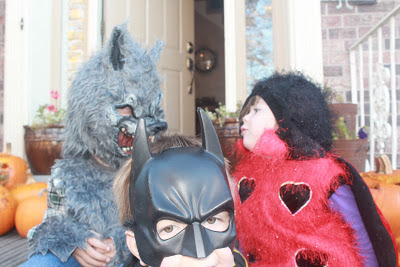 After I got the girls off to school--with their red-hair and false eye-lashes excitement, I was grateful to be able to get the little kids ready and headed to preschool in record time so we wouldn't miss their parade...but first pictures and howling lessons-- taught by Sophie. 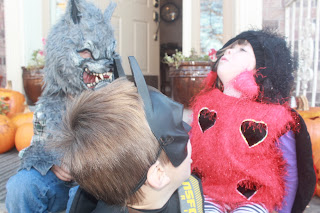 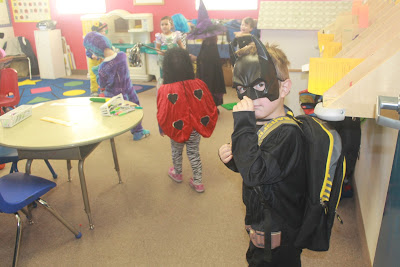 I dropped Sophie and Will off at their classroom and went to the little gym to await their parade. 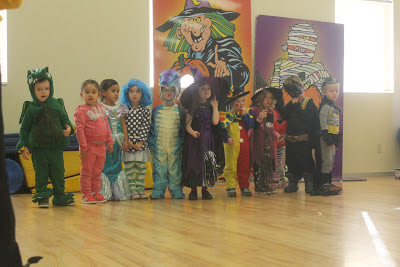 Batman was a little nervous. 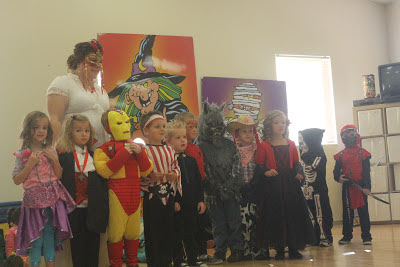 Grant's class. They sang my favorite Halloween song "Wouldn't it be chilly with no skin on..." 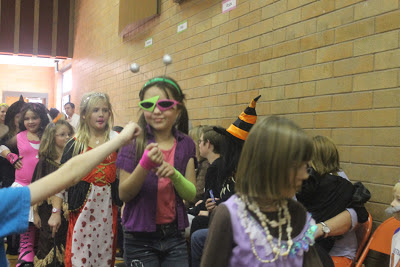 We had lunch with Grandma Martha at Arctic Circle. She wanted a Square Pumpkin kid's meal.  Then we went over to elementary school for the big kids' parade. I felt bad because Mary had wanted suspenders for her nerd costume, but I procrastinated and they were out at Halloween City..with no time to run to the mall, I had to create a costume at the last minute. So an hour before the parade I picked out all these eighties accessories-- sunglasses, headband with antennae, leg warmers. She could have easily hated it, but she was gracious. Sigh of relief. Thank you Mary. 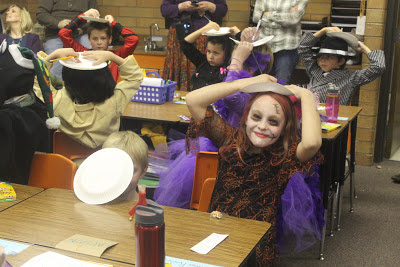 I got to help out at the Halloween party in Olivia's classroom. I am not very original, so I organized small groups into games of musical chairs and told the fourth graders they could pick what "style" of Halloween creature they wanted to be as they danced around to spooky sounds that I played on my stereo too small to be heard over the excitement in the rest of the classroom.  It was a fortunate choice of words.  They chose "Gangnam style" for every round, which suddenly made it the best game ever...which it clearly would not have been otherwise.  Rescued from my lack of preparation again. Thank you. 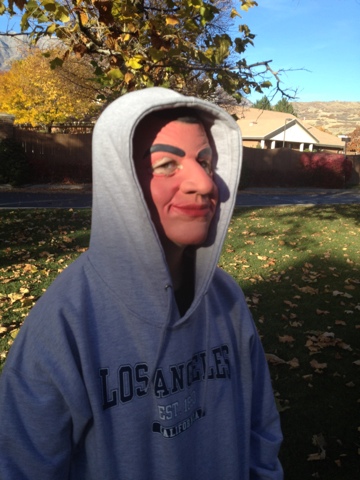 Kyle is in there somewhere. 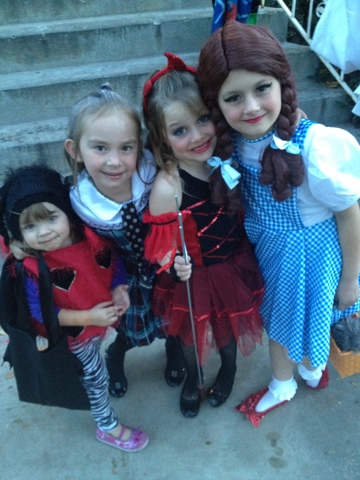 Sophie, Caitlin, and their friends Grace and Lilly. Getting excited to hit the houses. 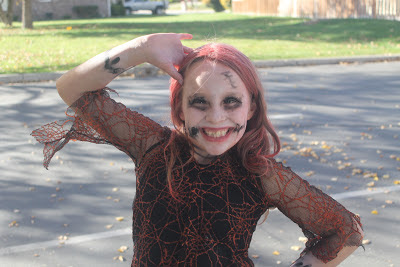 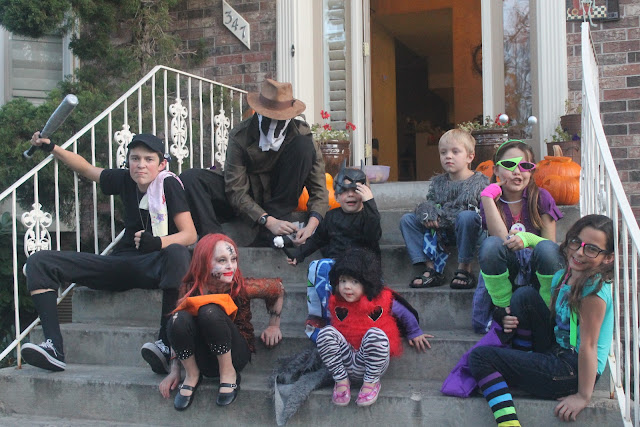 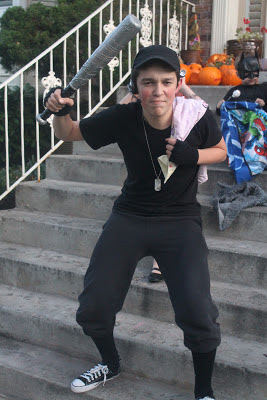 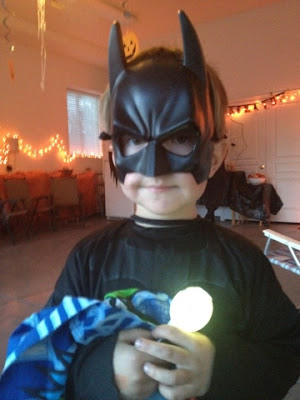 Granddad and Judith invited us to start our evening at their house for dinner--hot dogs, chips, purple grapes, and cupcakes.  Judith decorated the garage with spooky birds and lights and jack-o-lanterns.  We divided up and headed off into the neighborhood.  I love seeing our friends along the way.

Sophie only lasted a few houses before the  trick-or-treat process became utterly too confusing and she went home with Grandma Martha to "let's read" and fell asleep.  I was grateful that Olivia was still eager to be my companion.  She helped William and Grant walk up to each door, until about eight forty-five when we saw the big kids heading home, and Grant decided to join them.  Olivia wanted to stay out later, and William                                                                   insisted he would troop along as well, which he did.  He threatened to make me carry him, but was distracted by the beautiful, orange full moon rising over the dark silhouettes of the mountains. It was a perfect night and I thought again, really, we are growing up. 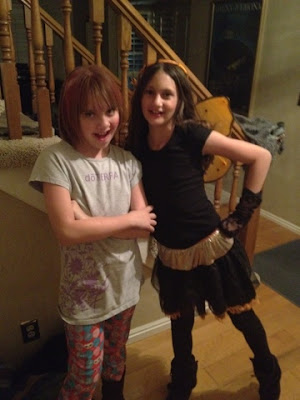 Bethany arrived home from trick-or-treating. It was her second year to go with her friend Lais. 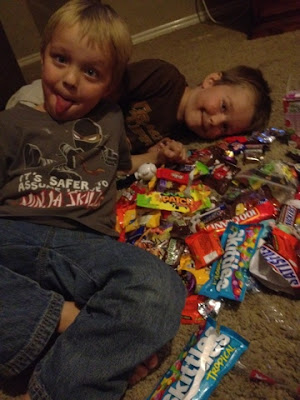 so much fun! we hold a halloween party every year, but the only dressed up kids are the ones attending our party. when i first came to denmark, 15 years ago, you could scarcely find a pumpkin on halloween and now there are all kinds of halloween things in the normal grocery store - pumpkin kits, masks, decor, napkins - but trick or treating hasn't really caught on. small steps. but i do miss seeing all of the clever costumes. i think the ones you make up at the last minute are the best kind!

thank you for stopping by my blog! it's good to hear from a sane voice in the US...i begin to despair, i think even my sister was hugely affected by the rhetoric and either didn't vote or voted for the wrong guy. it makes me sad. those of us who are rational and reasonable need to speak a bit louder! :-)

but i didn't mean to ramble on and on here...

again thanks for leaving a comment! it's the best way for me to discover new blogs!

Thank you Julie! I love your American take on life in Denmark. I saw the same thing happen in China with U.S. holidays. I am a big fan of your blog so it is an honor to have you visit here!