Judging by the archives, it would seem there wasn't much to say about January 2013.  But if there were just one word, it would be pollution.

Throughout the month Sam kept saying, "This is what I don't miss about Beijing."

And I kept wondering to myself-- Whatever happened to The English Beat?-- a band that will always remind me of Santa Barbara mornings riding from early morning seminary to high school with the Mormon kids in the Mills girls' Land Rover. The lyrics to Mirror in the Bathroom were stuck in my head, but just one line really.

It seemed like that was what everyone was talking about... in Utah Valley... in the Salt Lake valley. It was about the terrible cold, and the terrible stink, and the cold that kept in the stink. Or was it the stink that kept the in the cold? 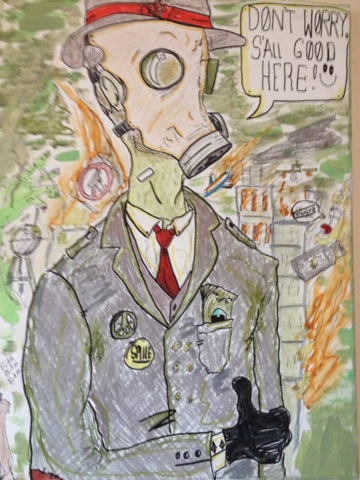 Toxins must have been on Ben's mind too. I walked into his room one January morning and found this Ben Raines pen-on-canvas newly displayed on the wall among the movie posters.

One Saturday we drove to Draper, and as we ascended I prepared myself to enjoy the majestic view at the top.  Winding up the mountain road, just as we reached the summit where our friends live, we all gasped. It was like a B-grade horror flick.  The black, amorphous, mass--heavy and foul, hovered over the valley, and from our view point, threatened to envelope and smother the inhabitants with a blanket of particulates. Meanwhile, everyone below, though pausing to bemoan their mild displeasure with another stinky day, continued innocently to inhale and exhale.

Facebook was rife with comments.  And I started to notice a meltdown trend among the family.  One night after the next, this child or that decided that life was tragic and meaningless, and on about the fifth day of stink I started to agree.

The ill tempered children brought back affectionate memories of our time in Guangzhou, and the wisdom of our dear Chinese ayis.  If the children were depressed, throwing fits, or running a fever, the polite explanation was always kongqi bu hao--bad air. For that matter if the washing machine wasn't working, the traffic was terrible, the milkman was late kongqi bu hao could also be held to blame. At the time, I dismissed so much of their insight and carefulness--umbrellas in the sunshine, watermelon makes you cough, the fear of cold beverages...

But years later, after just one week of bad air in this mountain paradise, I realized how right they were.  A little kongqi bu hao  and  everyone you knew had a cold or complaint.

At the same time, Beijing was suffering its own bad air crisis, with the particulate index at 725. That's 225 points off the U.S. Embassy charts, much worse than any day we experienced there. 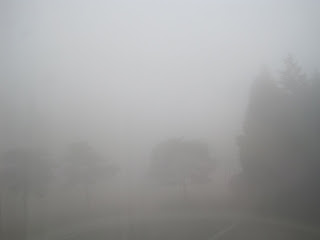 Even this February 2010 morning...can you even recognize this as River Garden?

Vice Beta blogger George Ding wrote this post, Beijing's Pollution Problem is Becoming Harder to Ignore including unbelievable photographs of the city shrouded in toxic air, and discussing the more serious effects of long term pollution, and The Sydney Morning Herald published this story, Canned Air for Sale in China about a Beijing business man who sold flavored air to increase awareness and concern about China's environmental crisis.


George Ding wrote, "Like with other global crises, self-delusion helps to get you through the day."

Jobs were the big focus of our 2012 election, and shipping to jobs to China a big part of the discussion. Between all our competitiveness and complaints about our weakening national economy, do we give China any credit for bearing the environmental burden of global commerce?  While we've shipped jobs overseas, we've also shipped the bad air, taking advantage of fewer restrictions to decrease costs, but leaving our toxic mark on the cities and villages abroad. At some point we will need to set new priorities, for the sake of their children, and ours. 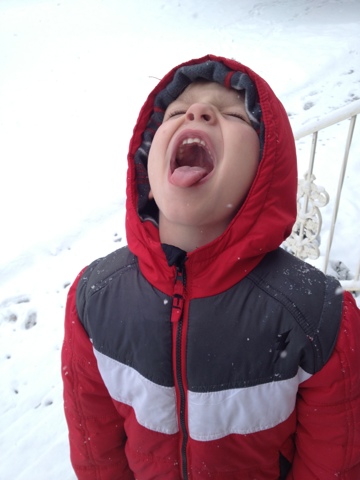 This was the snow that broke through the inversion.  It came in with warmer air and cleaned the skies. 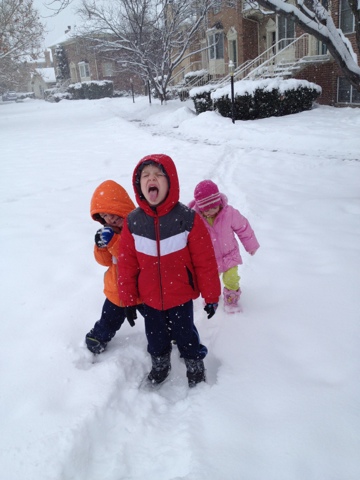 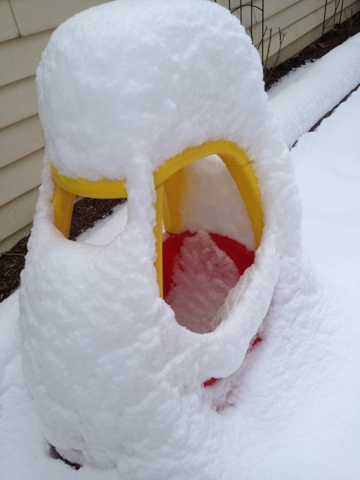 This was the fairly impressive accumulation of several January snows. 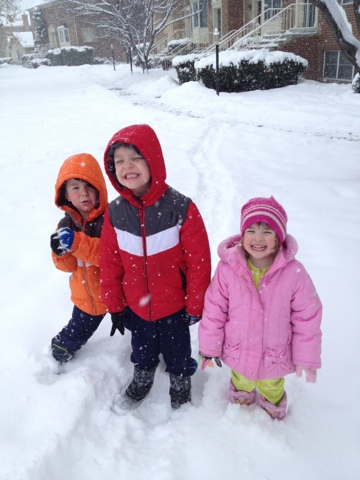 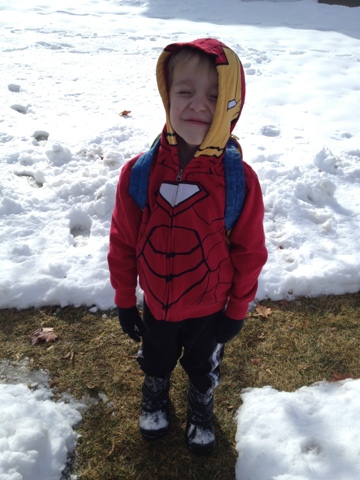 After a month of permafrost, we were blessed with a typical Utah melt.  While we were loading into the van one morning I noticed that Grant had paused in on this green patch and was quietly speaking to the ground. "Hello grass. I missed you."