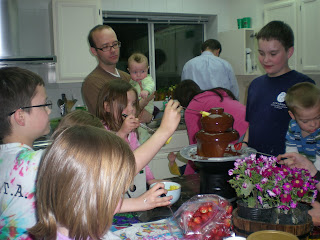 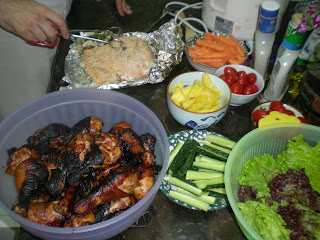 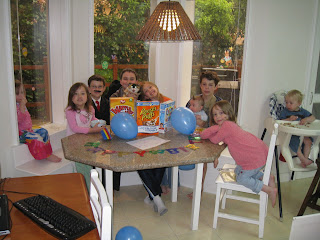 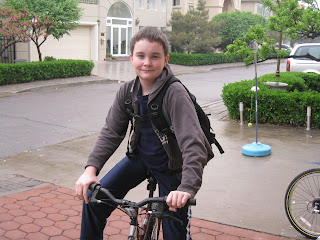 Sam is twelve! Friday was his birthday. We started the morning with our usual sugar cereals of choice buffet. Sam took some brownies to share with his French class. In the evening we had a salmon barbecue. Sam wanted to invite our friends, Lindsay and Travis Sevy and their children Maya and Asher, over to eat with us. We broke out the chocolate fountain...not so hygienic...but fun. Rob and I have been hoping to start a little open mic tradition in our home with the sound system we've been collecting. So far we have more form than content, but we were happy to have Travis play and sing for us.
Sam was excited to get some new movie buff books and some old classic movies from Grandma Martha. We got him some technology...a flip camera for his film making and a new cell phone. Saturday morning I woke to the Psycho theme song. He had already downloaded it as his cell phone ring. He and the boys spent the weekend making horror spoofs with the flip camera. Bethany was happy to be included.
Sunday Sam was ordained as a deacon. He was beaming, as were we. He turned twelve just included in the trip to Shen Zhen and Hong Kong for Youth conference and and temple trip, coming up this weekend. We are blessed to have such a sweet, funny, charming, talented son!