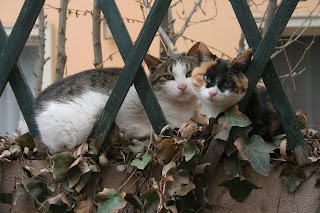 Sunday, Rob saw Pepper and Jack sleeping cuddled up together on this ledge. Of course they woke up just in time to glare for the picture.


Monday, I was grateful that Rob took the day off to celebrate our anniversary. I enjoyed our breakfast at a French bakery near BJU, the expat-hospital. After we ate we walked to the hospital for the baby's twenty week ultrasound. The results...it's a girl!

After the hospital we moved on to the Chinese DMV where Rob needed to pay off some tickets. I said "This puts the U.S. to shame," when we walked in to the almost empty waiting room. Just one man stood at the window where we waited. In China the police don't stop people for traffic violations, they just take a picture of the back of their car with not-so hidden cameras, so they can read their license plates. So the lady at the desk was showing the man the pictures of his car on the monitor, but he still wasn't convinced of his own wrong doing. "That was my jie jie," my older sister, he said, trying to stifle a chuckle.

And there I was laughing along with him until my own husband brought me up to the desk to sign off his four of his speeding tickets, which was what he had been advised to do in order to keep his driver's license. Mine was more dispensable, since as you know, I only drive in right turn only circles.

So the man at the other window says to the lady, "Ask that tai tai how many kids she has."
He recognized us from the do re mi. "I have nine," I said, " So I'm xiao xin (careful)," and made Rob tell them the tickets were his. It hasn't been physically possible for me to even keep up with the speed limit since the day I had children. Didn't help me keep my license though. A lot of good my fame did me.

I won't pretend that didn't upset me a bit, since I'm working on the stand-by-your-man part of my personality, and not doing such a great job of it. I really do feel sorry for Rob. I have been heaping all of my what-next stress on to him. Which is why I may need to eliminate so many what-nexts from my life, for his sake, as well as mine and the kids'. So fourteen years haven't been without their ups and downs and neither was our fourteenth anniversary.

I was grateful to Rob for helping me drive all the way down to the toy market to get party favors for Caitlin's birthday party, our next errand . Then we had a really delicious lunch at Tavola an Italian restaurant by the embassy where we kept the conversation light. Rob may be surprised to know that Tuesday, despite our many intermittent, unavoidable at this point, what-next discussions, which more often than not ended in my sobbing, I still savored the memories of our day together, as I finished the last of my pesto spaghetti at lunch time.

In the evening our Family Home evening activity was look at the ultrasound and guess what the gender is. That was basically unfair since the best picture of her whole body was kind of a feet over her head yoga position. Olivia had been convinced it was a girl since the first ultrasound when she didn't see "that thing sticking out." In March she went around the neighborhood telling all her friends, and their mothers, and not sparing the anatomical details. So last night the girls erupted in cheers and the boys didn't mind, Sam said, "as long as we don't name her Iris Buttercup." That was Bethany's suggestion.
Posted by Megan Raines at 5:50 PM

At least Iris Buttercup is sort of a name. When my mom was pregnant with my youngest sister, the then-baby sister wanted to name the new baby Food Lion (after a grocery store where they live).
I love the cat photo! And that's too bad about your driver's license. Did having a diplomatic passport not do you any good in that situation?
Do you have any idea what you're doing next? Is staying in Beijing another year no longer a possibility?

Hi Zoe! Thanks so much for your comment! My kids loved Food Lion when we lived in Virginia. That's a great name!

The funny thing about that driver's license story was that the man in the window said my husband's license, that the U.S. consulate in Guangzhou issued him, was fake. So I guess the diplomatic passport isn't as helpful as we hoped!

Rob is still waiting for his next assignment. Maybe we will all stay here. Not as exciting as Italy, by any means, but we do have great friends and wonderful household help.