I think that I shall never see....

I'll miss our playground when we leave China. I've looked out the girls' window on cold dusty days to watch one lonely, bundled child on a swing, being pushed by an obligated ayi, and other mornings to see the bright yellow slide sparkle with dew and the new determination of the almost summer sun, and summer evenings to see moms passing the witching hour chatting in bunches, surly adolescents twisting the chains on the swings, and no-shoed, barely diapered babies (those would be mine) making a quick dash to the spinner before anyone notices they've left the house.
So last week, one evening, as most of us were heading in to figure out dinner, a group of Chinese workmen showed up with thick rolls of white tape and closed off a section in the center of the playground. "Oh please," I thought. Don't let this be like last summer when they made a futile attempt to grow grass on the soccer field right when summer began. The men started to dig big holes, so when Olivia came in for dinner she announced that she was sure they were building a swimming pool. The next morning the mystery was solved when two all-but-grown trees arrived in the bed of a large white truck. 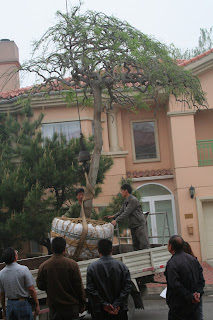 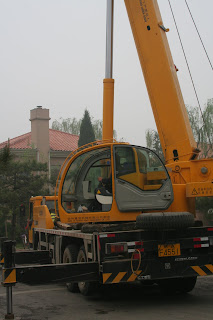 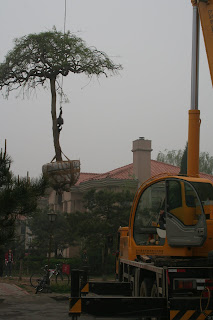 I grabbed my camera and Grant, who was a bit feverish that day, and therefore less enthusiastic than I had hoped. But, he made some interesting observations. He pointed out that Bob the Builder was driving the crane and said "that scary tree go to the park." That summed it up. 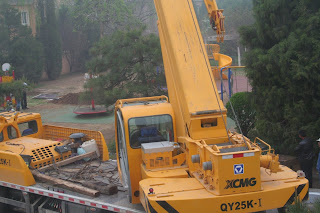 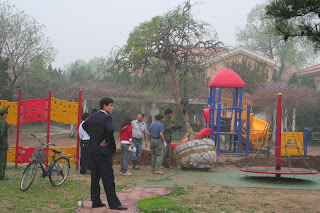 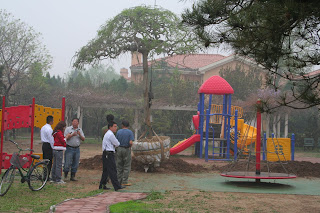 So in China there's always some person in a suit standing around looking important but doing nothing. This one recognized me from the Do-re-mi. Then later some guy at the bus stop pointed to me and said "you...t.v." and made some almost obscene gesture that was supposed to represent singing in a microphone. So I wish all this notoriety would pan out in to something more lucrative, but at least the public reaction has been entertaining.
Posted by Megan Raines at 7:02 AM

I have notice that some guy in a suit too. Very interesting. Thanks for the great pictures!