so happy about three 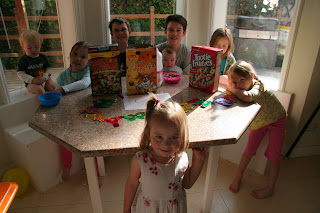 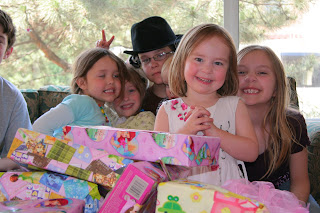 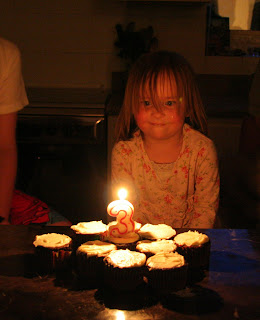 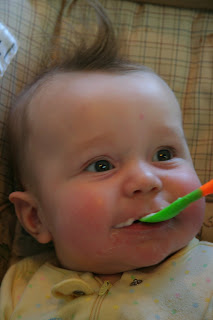 My thoughts about a great weekend on a crazy monday morning...

The girls wanted to 'make soup' with leaves and sticks and neighborhood friends. As the mosquitoes came out and the sky was getting a little dark, William and I, no time for shoes, followed Grant out to the playground too.
Grant's toddle does not disappoint. Its all about big eyes, bright smile, waving arms and wiggling behind.

Grant pointed to the moon and asked, "Is bee-ball?"

For Grant, all good things in the world, and now solar system, fall into three categories 'car-car','kuh-kie', or 'bee-ball'.

Sunday made five months for William and his first rice cereal face.

Everyone was anxious for Sam to be back. In the evening, Kyle stood out on his balcony on the look out. Sam said he knew he was home when he saw an only-in-a-diaper Grant running down the street, Mom and a dangling William trying to catch up.

Sam was returning from youth conference. He flew to Shenzhen last Thursday with thirty-five Mormon twelve to eighteens, mostly all from River Garden compound, and a few leaders. They took a train to Hong Kong on Saturday for a temple visit, a trip to Victoria's Peak (which now has a Burger King!!) and his favorite part, he said, splits with the Hong Kong Elders. So who would of thought...three years ago when I was on Victoria's Peak at Matilda Hospital having Caitlin, that three years later Sam would be back for Youth conference....you just never know. What a blessing.

And as for a crazy Monday morning. Rob dashed off to the embassy early in a good natured panic. He had a Beijing to Washington D.C. video simulcasty kind of thing. I forgot what he called it. Good news, he was twenty-four hours early, and not at all late. It turned out to be on Washington's May fourth, not ours...darn that International date line.

Bethany came in reporting that Cindy (our dog) made a poo on her carpet, half hard, half squishy, that looked like a giant broccoli. While I cleaned that up, a no-diapered Grant went down to breakfast and pooed (how do you spell the past tense of poo?) on one of the benches at the breakfast table. The good news, the smell of the dog poo got Bethany out of bed early and Kyle didn't have a fit about sitting on the Grant poo before he noticed it. Everyone made it to the bus on time, with only some G-rated violence.
Caitlin, Grant, dangling William, and I played in the clubhouse playroom for while, as we like to do in the mornings, then came home. There's a kind of an aftermath feeling to Monday mornings. So here I am, kind of writing about it and trying to catch up with it at the same time. Caitlin was last seen with a bottle of chocolate syrup, so chances are, it will catch up with me.
Posted by Megan Raines at 5:53 PM

Sorry I missed it! Makes my hectic morning in the office seem like a cake-walk. Thanks for preserving the memories!

Wow! I thought my life was hectic... But those are GREAT memories! I thought they were hilarious! I hope we can come and visit you guys some day!

Spent a pleasant time this morning looking at the latest of the kids. I'm amazed at how much the girls are growing to resemble each other. And every time I look at that buffet, well, I just want to hop on the plane, but I suppose I'll have to update my passport first.
It's Sunday morning here. Lots of snow--and more predicted for the week.