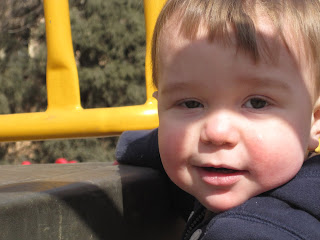 No one thinks their baby has the face of a bully.... Well, maybe in that picture he does.

But how about this sweet face? 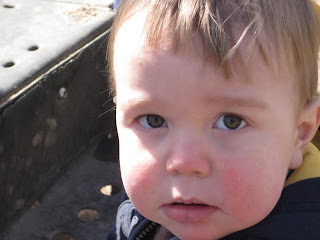 No one tries to raise the meanest kid in the third-grade, or starts September saying "Hey, let's really get to know the vice-principal this year."
But we parents make mistakes and the kids we raise make their own choices too, sometimes better, sometimes no better, than ours.

So what is great about blogging? Finding supportive comments, sharing "blog love," as some say, with other blogs. It makes me feel so happily connected to new and old friends, family, even when I am here in Beijing, feeling somewhat home bound with the kiddos. Compound fever is what I'm feeling.

Yesterday I had a bad blogging day though. I linked on to a blog I had been looking forward to reading for some time, a blog of a friend that I admire very much, but I was sad to click away.... not feeling the blog love. There, on the page, was a discussion of a school incident, and the more I read, the more I realized that my son was involved. Although no names were mentioned, I recognized the circumstances. I felt hurt that the matter was discussed so publicly, and that his part in the incident was exaggerated. And, there were already five comments, and their angry stream of energy, from people who had no idea what really happened, but were ready for an adrenaline rush anyway...

... so quick to jump on the angry train with half the story...

"Don't we have anything better to do?" I wondered.

It's my own fault, this compound fever, I mean. As I've mentioned before, I have driving-in-China- anxiety, so my options are limited, since my personal parameters are 'no left turns.' And, I hate to shop. Shopping is a sure ticket to adventure in China. But adventure...is kind of overrated anyway, and not even such a regular occurrence in everyday ex-pat life.
Sometimes I just feel compound bound. What I would do if I could, is not here. Voice lessons. Someone to compliment my German, criticize my French. I'm just a nerd. That's my idea of a good time.
I also think about the years I lived in Augusta, Maine, when Sam was at-home and too active to be so. Grandma and I would go to the Lithgow library, the kids' museum, the Maine State Museum, the McDonald's with the play ground...(remember those?) and even Walmart was just the right amount of adventure for some days. I just miss having easy, cheap, fun stuff to with my kids at home....and of course, we miss Grandma.
So I talk to Rob about do I really want to spend another year here. And that is a stressful discussion at bedtime. And I really can't sleep because I'm thinking about the comment that I just had to leave on my friends blog in response to her story about the incident, wishing I hadn't felt like I needed to do that...but still feeling like I needed to do that.
And I was wishing that I could crawl back to the 1970's, to when we girls chased the boys and the boys chased the boys and it wasn't harassment, it was kind of fun. And the schools didn't need the in-house lawyer to explain to the children the legal ramifications of keep your hands to yourself... or don't play too rough . I wanted to go back to my childhood bedroom to the window nook where I kept my record player and listened to music for hours on the floor, not worrying about how to raise my children, or where to raise my children, or how to manage embarrassing issues among friends...well maybe I did worry about that last one.
One of my favorite albums from the 70's was Billy Joel's Glass Houses. I loved the song All for Lena. I loved the cover of the album, Billy Joel in front of that strange glass house. I asked my parents what that was about....people in glass houses don't throw stones. I still think about that picture of Billy Joel when I think about that saying. And I thought about that album and that saying last night when I thought about the incident, because all mothers live in glass houses.
And now to turn to the bright side of China-life. Dinner last night and the night before was prepared by our new ayi, Zhang Ayi. 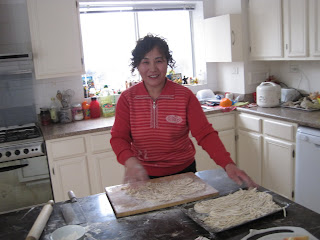 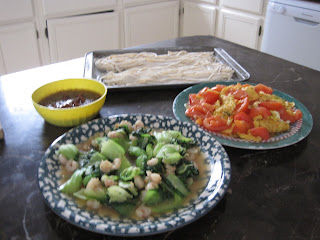 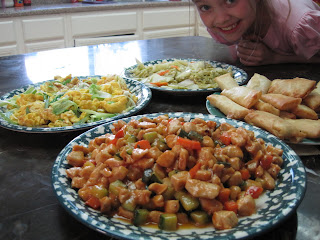 And although Sam swears that he hates any meal that falls under the heading of 'Chinese food', I had to cut him off after his seventh spring roll, so I think he'll survive. Zhang Ayi and Cui Ayi work together now. For lunch, Cui made these shredded potatoes that we ate with these pancakes that are effectively tortillas, so we will use the extras for burritos tonight. 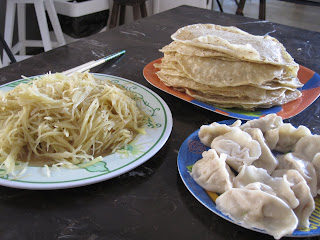 Further on the bright side, the sun did something different today. It shined. And, the sky even had a new look, blue. Even though I complained to Rob about the same-old-same-old clubhouse routine, Grant had a particularly good time this morning playing with his friend in the playroom, and it was the first day that he actually obeyed when I asked him to not open his box of chocolate soy-milk and spray it all over the store floor, before we pay for it.
And, I bought a bag of barbecued flavored Corn Nuts, just for more nostalgia's sake. They took me back, not quite so far, to lunch time at Santa Barbara High. Remember walking down to, was it De La Guerra Street, to the Italian Market? That's in case you're reading Amy. Remember those amazing Italian Subs with pepperoncini inside? A perfect meal with a Strawberry Kiwi Koala drink. What ever happened to those Koala drinks? Corn Nuts had to do when we didn't have much money. I was sure they had a little protein.
Posted by Megan Raines at 8:56 PM

Oooooh, I've had that "wait, that's my kid" experience. It stinks. Sorry. I hope it works out okay.

On a happier note. . . mmmmmmmmmmmmmm spring rolls. I need some of those. And is that the same potato in pancakes stuff that Bri's ayi made? I want that recipe.

At least your clubhouse HAS a playroom.

I also read that other blog and, although I had no idea your kid was involved in the whole thing, I can understand her frustration. I guess it's a good thing I (usually) pay attention to my husband when he lectures me about what to include in my online rants.

Thanks for your comments! Just to clarify, my son was chasing another boy, because he thought the boy was chasing his friend. He grabbed the boy...and yes I did tell him that isn't P.C. in 2010... After he grabbed the boy some other boys grabbed him, at which point the boy, who I believe the discussion is about, went to my son's aid and that's when the hitting occured. That is the story that my son reported, and the injured boy's father also assured me that my son was only involved in that way. Like I said, chasing and grabbing people is pretty normal behavior for boys, but I pointed out to my son, you never know what it will lead to, how someone will end up getting hurt, who is going to write about it on-line, and how they will tell their side of the story. My son has been instructed that yes he should "sit around and be bored on the playground" for the rest of the school year. My husband also raised his eyebrow, rolled his eyes, and clicked his tongue at my need to open my big mouth. Husbands are useful for many things.

Ms. Super L..I think that is the stuff we had a Bri's house. She makes it la and bu la. I like both. Maybe I'll ask them to cook for playgroup next week! I thought you guys did have a playroom upstairs from the pool. I seem to remember my son (cough cough) get into some trouble there after Bethany's baptism.

Hi Megan, great blog! I loved reading your entries and your super honest take on life in the bubble that is compound living :)
Your singing is simply sublime; no wonder you miss it so.

I must say you looked glowing today, that new little bundle of yours is already making it's presence felt by the way of dewy skin and sparkly eyes.

OK, I came up as a guy...
This is Bec from playgroup, not some random guy called Ben!

Thank you for visiting! It was great to find your comment here, although I must admit I was hoping to make my husband jealous with the "Ben" thing. Thank you for your very kind words. I assure you the sparkle in my eyes was all about Catherine's amazing lime cheese cake. Have a great day Bec!

You are fabulous! It is sad what kids are not allowed to do anymore. I remember giving my fair of black eyes to boys who I thought were cute because I would chase them and they would fall =) I also remember throwing a girl around by her long hair, but she deserved it..... Let me know if you need anything from the States, I can send you a BIG package!!!! I love you!

The kids are proud to call you Aunt!
We love you too!

Megan,
I loved "Glass Houses," so candid and perceptive. As for the "incident", sounds very much like just another day on the playground. If "boys will be boys" means anything, it gives a name to the rough and tumble you've described.
Speaking of boys, Kyle's birthday present is on its way. Lots of love.

Hi Dad! It's great to find your nice comments here. I'll give Kyle the message.
We miss you!
Love,
Megan

Man that food looks good! I miss it and I miss Xiao Liang. How do you do it without your Ayi??