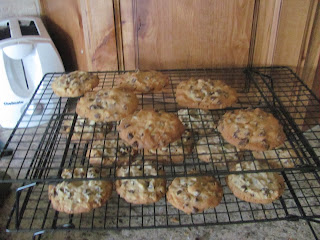 Sunday, January 23- Sam was back in the kitchen.  He was excited about this cooling rack that Grandma Martha gave us.  The cookies he made were from the Mrs. Field's cookbook.  They're made from honey instead of brown sugar, which gave them a different, but delicious, texture. 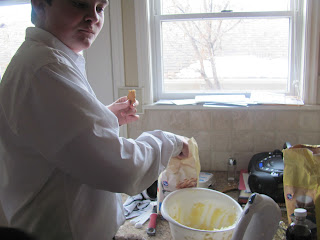 Looks like Sam was doing a little sampling too.  Next he made jam filled butter cookies, and then Tuna and Garlic pasta, one of our family's favorite recipes.  Sunday evening Sam insisted that I go to a fireside. Turned out to be fascinating- an anthropologist sharing his story of his conversion to the LDS faith.

So when I returned I was happy to find all was well, the kids were all together, happily watching Power Rangers the movie, which was why Caitlin and Grant have been shouting "Go Power Ranger Pink! Go Power Ranger Red!" all week.

Monday morning I found the casualty of my absense.  My camera was lying on the floor underneath the sofa, and I realized that the shutter was shattered, so when I opened and closed the lens, parts of the shutter stuck out.  I imagined the cost of buying a new camera or paying for a repair. All morning I tried to remind myself to look for how this mishap could possibly be an opening in the universe.

When I took the camera in to the shop, not surprisingly, the clerk suggested I buy a new one.  Instead I decided to rip the shutter out of camera, and was happy to find that it worked just as well.  It just looks bad. So what I thought might be an "out with the old in with the new" experience became a "use it up wear it out" experience instead...all the more empowering for being more financially appropriate, at least for this month.

One of the many ways that we have been blessed lately... Granddad and Judith have made a tradition of bringing us dinner every Monday night.  It's always delicious, and always fun to see what they've brought.  Kyle loves Judith's meat loaf. 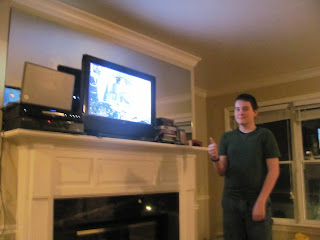 This was the scene Tuesday morning.  Sam had everyone up before 6:30...5:30 PST, to watch the Academy Award nominations announced.  The kids were happy to see True Grit get so many nominations, and Inception pick up a few...two of their favorite movies of the year. 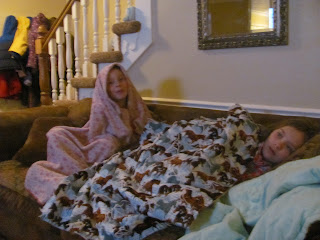 The girls were up too.
Since we weren't invited to the breakfast in Hollywood, we had one of our own Tuesday night.  The kids call breakfast at night brinner. 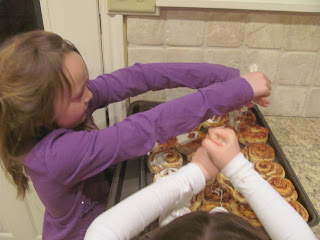 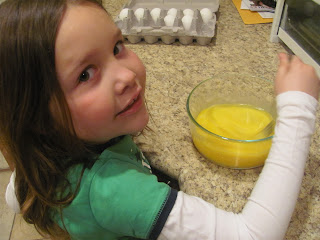 And I was busy thinking about brinner and forgot to have the kids watch the President's speech...What a flaky mom...
Wednesday was supposed to be the beginning of the daunting task of re-enrolling the family at the dentist. I was set for my own appointment, and driving to pick up Grandma Martha,who had generously agreed to babysit, when snow flurries turned to snow fall. On the way back to our house, just before we hit the somewhat formidable hill that descends toward our street, my brakes went out, and I couldn't control the steering. I hadn't realized how slick the roads were. I pulled off to a side street to see if it was a problem with the van or just a slick spot, but every time I pumped the brakes, they would shudder and the back end fish tailed. We decided to park and unload, and the four kids and Grandma and I hiked home in the snow.

It was nasty driving but beautiful walking. I felt grateful that we hadn't tried to drive down the hill, and that the boys were so happy to be out for a winter hike. It was a great opportunity for them to try out their new Buzz Lightyear boots...one of the joys of being a three-year-old boy no doubt. 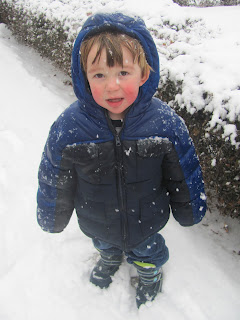 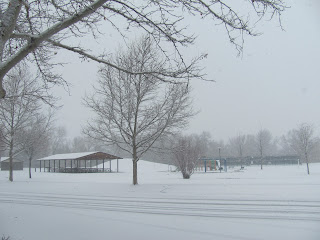 So the world is white again...even though my teeth aren't.
Posted by Megan Raines at 12:58 PM