Last week a flier on my windshield was my opening in the universe.  It said cheap pizza.

So Friday night the girls and I set out on what wouldn't have been an adventure for a normal person with a basic understanding of  local streets, nor for anyone with average parking abilities. I don't fall in to those categories so when I finally found the destined place,with it's promotional search light and all, I had to have my nine year old help me back our monster of a van out of the did-someone-from-Beijing-design-this sized parking lot in defeat and park elsewhere. We marched back, lifting Caitlin over snow drifts, skirting sheets of black ice, shivering in the cold because, as I always say, parking as far away as possible extends your life expectancy, and what's more, someone was offering free stuff. 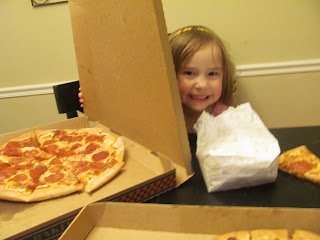 Friday night was the opening of the new Pizza Pie Cafe Express.  They sell five dollar pepperoni pizzas, and in honor of the Grand Opening, it was buy one get one free.  Two-fifty a pizza!  Plus free kettle corn. There's Caitlin with our Friday spoils.

And Friday was movie night,of course.  Did I mention that I love Jack Black?  The boys ordered Be Kind Rewind from net flicks  Sam entertained the little boys with the popcorn popper. He's a good brother.  They are all good big brothers and I am grateful for that. 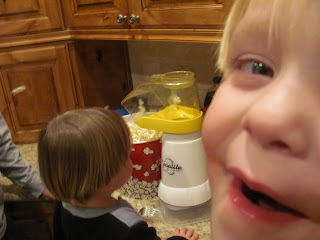 Saturday I thought I'd make a difference in the pantry. 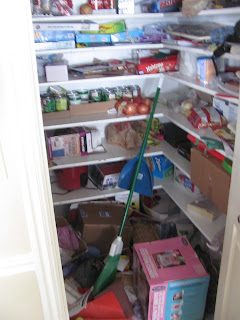 Still thinking...
But Sam and I did make some progress in the area of goal setting. We've decided, and here I am publicly announcing it, to set a goal to run/walk everyday for six months...with some allowance for repentance, of course. We will plan a trip to Universal Studios Hollywood to reward ourselves, and to celebrate the boys' love for all-things-acted- filmed-edited...so I'd better start running-earning- saving...


We've been here for many months now and for many months I've looked out and thought about running in the park in summer sunshine, or the crunchy crispness of fall, and here was the day I chose to get out.... 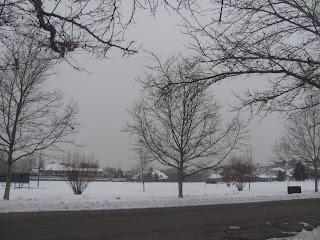 I have to embrace this aspect of January to help me over come my S.A.D.


So Saturday night I tentatively brought up the possibility of returning to Pizza Pie cafe Express for another night of pizza pick-up adventure.  Was met with cheers and off we went.  This time everyone joined me, since they all wanted their own kettle corn.  Free stuff is worth a trip across town.  The big kids all took a turn spinning a big wheel for prize coupons.  We walked away with our four pizzas for ten dollars and about forty dollars worth of pizza coupons as well.  I felt so resourceful!

If only pizza could be used as currency for all the necessities of life.
Posted by Megan Raines at 10:19 AM