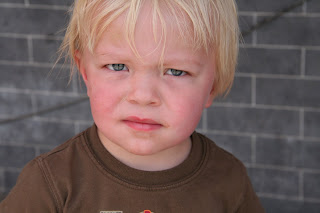 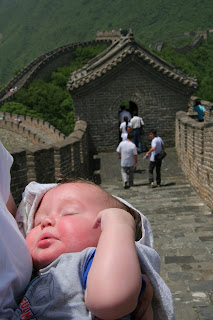 In China there's a saying “You're not a great man until you’ve been to the Great Wall.” William is off to a good start. It was Olivia’s Saturday to choose an activity. She had been asking me for some time to go on a trip up to the Great Wall. It is about an hour’s drive from our house, through countryside, villages, fruit orchards, and trout hatcheries as you wind up the hill.

The last time we went was in August with Rob’s cousin. Grant wasn’t walking then. Saturday he seemed to feel the spirit of the Ages under his feet as he took off running down a slope on the wall. Rob caught a great picture. 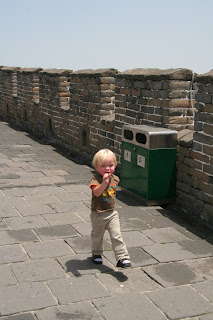 So how many people can say they got their first bloody nose doing a face plant on the Great Wall of China? He still has a goose egg. Poor guy.

Xiao Chen told me that she has never been to the Great Wall. That is kind of hard to imagine considering that they are from Beijing, but the hour drive is too expensive for them to take. So I wrote in my calendar on October, “take Xiao Chen and Lao Tien to the Great Wall.”

It’s nice to go in the Fall when it is not so hot.

This is a picture of the trying to figure out how much money we owe for cable car tickets process. You pay according to your height, not age. Olivia was incensed because the lady was going to make Mary pay but not her. Olivia is a year older. The pay according to height thing is a big irritation for Westerners with tall children. 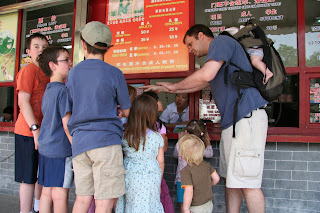 This is one of my favorite samplings of Chinglish. 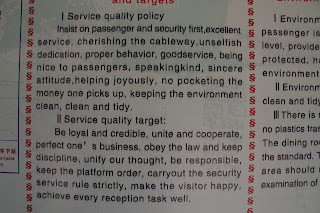 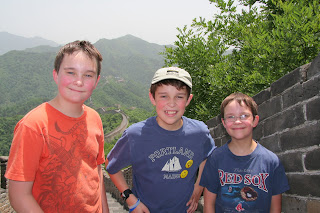 Olivia wanted the rest of us to walk in the opposite direction to explore a part of the wall we’ve not seen before.

After we come down the hill we always buy lunch at this little egg sandwich lady. Some of the kids just want tubs of “easy noodles.” Everyone wants a Sprite. The lady is very friendly. She has little tables and stool behind her stand. The fruit selling ladies always come over and try to give us dried cherries and ask a bunch of questions about the kids. 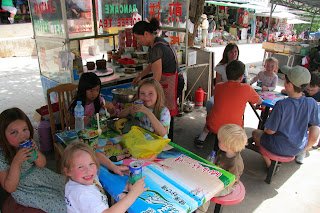 We usually spend lunchtime trying to convince the kids that they don’t really want a souvenier because they are all cheesy and will break or end up in the bottom of their toy box but of course the kids are never convinced. We ended up with at least four of those colorful paper umbrellas, that we’ve surely bought them a couple times before. Kyle got some terra cotta warrior guys. Sam got a feather painting of the Great Wall that he has been wanting for about two years. Bethany wanted some magic trick rings that the man tried to get us to pay eighty kuai for. We ended up paying fifteen. I forgot what Ben got but he was happy.

On the way home we stopped to take pictures in this amazing field of Black-eyed Susans. 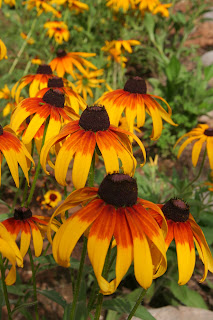