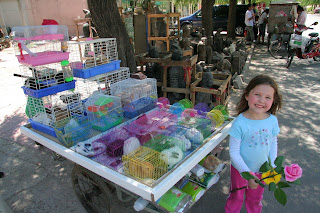 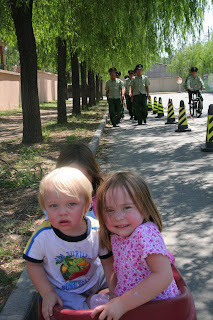 Who doesn't love notebooks? Who doesn't have to buy four or five every September just because they're on sale? We have a collection in the garage. I can't part with them. I decided to start keeping ideas for my blog in a notebook and I decided to forgo the new and clean and crispy-paged notebooks for one of those kind of misused, crooked spiraled, pages torn out of, messy-handwriting-ed kinds, just to help it feel fulfilled.

A notebook is its own world, the promise that new ideas will be preserved. It's what someone heard or read and thought was worth remembering. A notebook is entering in to another person's mind. It's hard to find one closed and not peek inside.

I mentioned to Rob that no one reads my blog. He reminded me that there are hundreds of thousands of people on Blogspot so if I don't draw attention to it, it's just like a notebook in the universe. So we are all kind of like notebooks. But its actually amazing how we do find each other.

I think my friend Hollee would make a fascinating notebook. She's the one in the room who everyone is listening to. She is the type that says..."but that's another story" and you want her to tell it. She makes us laugh because she-really-just- said- that.' And she makes us cry because she tells a good sad story too. Her husband is often off on job-related ramboesque adventures and to her that's just another day, more material for the stories.

My friend Hollee was telling me about one of her daughters, She has had a few run- ins with the guards in the compound. Our guards are young men from the countryside, who stand around in slightly too large, forest green uniforms, holding stubby pencils and worn notebooks. When a car goes by, when a dog goes by, when a shirtless kid on a bike goes by, the guard writes it down.

So her daughter found a guard's unattended notebook on a bush near her home and felt compelled to spend some time with it. She grabbed it , ran home, and used her best Mandarin to determine that there was some mention of her house number and what time her Dad had come home from work.

I look out my window and see those guys, looking bored out of their minds, sometimes practicing a little kung-fu, or kicking up dirt, probably just missing home and wishing the foreigners would at least give them something interesting to write about, and we foreigners fantasize that we have. I am grateful for the guards, for their ni haos and their smiles, for keeping track of all the stuff my kids leave in the playground, chasing down my dog, and for using their stubby pencils to make our lives seem noteworthy.

So just a few more days to prepare for our transpacific flight, scary. And here I am, not packing, not attending to the upheaval we created when we moved the boys rooms around. Sam moved into our study and Ben is in Sam's old room.

Yesterday I spent a few hours wondering if we should be postponing our trip. I had a temporary loss of my sense of adventure.We are lacking several plan A's. Like the plan A for where to stay, what to drive, how to actually leave the airport. We have many wonderful family members on the other side of the world working very hard to arrange plan A's for us. We're just running into a few problems here and there. But when I mentioned the postponing idea to the kids, it was quickly shot down, most convincingly by Sam (speaker of the house.)

And so today was Mary's last Wednesday in preschool, our last Wednesday of the school year to walk up to Pinnacle plaza for egg sandwiches, a wind in the willows day. I was walking and pulling the kids in the wagon and thinking about travel and parenting and notebooks.

Tuesday was a notebook page of hmmm...chaos, Grant flooded the kitchen several times with the broken water cooler spout. Grant decorated the hallway and stairs, several times, with kitty litter. Caitlin argued incessantly with her playdate friend. Kyle had to come home from school because he was sick. I took the chance to run around the school paying for lost library books. Cindy (the dog) made a big poo by the piano. Caitlin yelled "I hate you! I hate you!" at me for all to hear because I wouldn't let her go home with the Sevys after dance class.

Tuesday also had its happy paragraphs. Mary and Caitlin's dance recital...lots of eensy weensy spiders and lolly-pop, lolly-pops. In the evening we went to Sam and Olivia's performance of The Magic Paintbrush.

I am grateful to look back on the things in the day that, for better or worse, fill the notebook. And I'm here, writing about this now, to remind myself that this Saturday's adventure across the world will bring the potential for many writing triggers. What ever may come the response will be mine.
Posted by Megan Raines at 12:25 AM