the most of the day 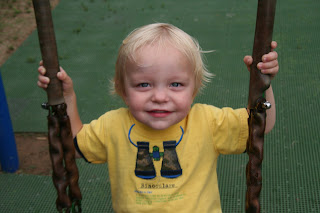 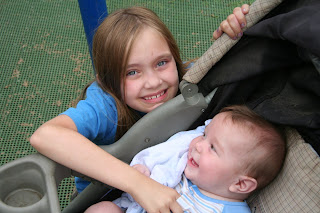 Monday...our first day of summer vacation. I didn't have a plan for the day, as much as just a hope that the ten of us could organize ourselves into happy, productive activities, for the most part.

Sam stepped up and made himself very helpful. I came home from the pool with the girls and he had his homemade macaroni and cheese baking in the oven. What a dream!

Monday night I heard those familiar firework-ish sounds. Was it a holiday? No. Tuesday we had rainclouds that turned to heavy thunderstorms storms. The "fireworks" must have been the cloud seeding. I called Xiao Chen and Lao Tien and asked them not to come out on their bikes. So we were kind of more relaxed around the house and just gave in to watching too many movies...they looked so cozy. 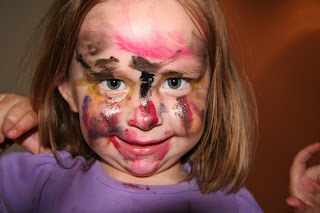 Ben made some Lego creations. 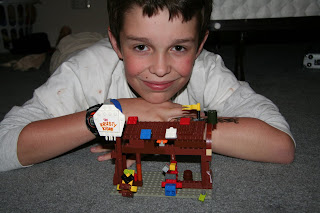 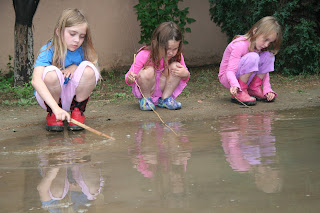 The girls made the most of the day...
enjoying the puddle on the playground. I thought they would make a great picture but by the time I managed to get the camera, the guard had told them to stop playing in the puddle. "What?" I said.

"Get back over there and play in the puddle so I can get your picture." I demanded.

So the picture didn't reflect the youthful spontaneity that I had hoped it would. And I didn't take the time to compose it well because I was feeling a bit sheepish with the guard looking over my shoulder.

Wednesday the weather cleared to just polluted. Sam, our amazing coordinator, planned a minute by minute schedule so we could go in to town and see Star Trek. Unfortunately, despite his best efforts, we were ten minutes late and we couldn't get in. It wasn't sold out. No one had showed up so they decided not to show it at all. Hmmm... We saw The Night at the Museum instead. I was grateful that Sam was willing to change gears. We had lots of popcorn and ice cream at MacDonald's after.

Thursday was more rain with periods of damp and foggy. The air was apparently too polluted to be measured properly. William is quite congested and I'm sure the bad air is not helping.

It's Friday morning. The boys finished up a game of Life and held William so I could get some house work done. Kyle reported that, in the game, had written a book about American History and won the Pulitzer prize and Ben said he had ordered two children on e-bay. I guess the game has changed a bit. I thought about how I hope they will make the most of their many gifts, in real life, so they can be just as happy with themselves.

Bethany is playing with Anna. Olivia went off to find Sora. I've promised we can make cookies and homemade pizza today. Sam has already started into the cookie making. I'm grateful for helpful children.
Posted by Megan Raines at 7:24 PM

okay... so you're officially the most amazing mom ever. how do you find time to write on three different blogs AND do vocal exercises AND learn to the play the guitar and the piano AND take care of your NINE KIDS?? you are SO amazing!!!

Mari you and I both know I can't play the piano. I'm just waiting until you're a mom...now YOU will be amazing!