if I had a hammer 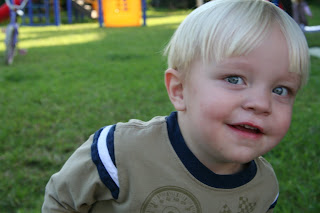 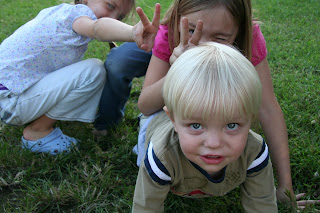 Rob gave Grant a new haircut. He seems happy with it.

Saturday September 5th, Rob and I drove in to Beijing to Xin Jie Kou, music street. We had to get the trumpet repaired so Kyle can get started on it. We also needed a chin rest for the littlest violin, Olivia and Mary have been begging to play it. We had lunch at a so-so kosher restaurant, not as flavorful as authentic Chinese Muslim food. The trumpet needed to be left off, which meant we would need another afternoon to retrieve it.

Saturday evening, River Garden hosted a Resident Appreciation evening. I was cynical when I read the invitation. It was more about H1N1 than hospitality. But, when I saw all that was going in to the preparations, I knew the kids would want to be a part of it. Besides, I always show up to a free meal.

It seemed like the whole community turned out. There was an international buffet, cotton candy, bouncy house, entertainment. Here's a picture that Sam took. I hardly recognize the club house. 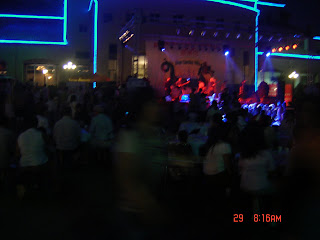 
The next day was the first Sunday in September. Sometimes the boys get a bit grumbly on Fast Sunday. The easiest way to get Kyle out of bed is to remind him what's for breakfast. That's not an option on Fast Sunday. Kyle started into his moaning. I reminded him that we were fasting for Grandpa Bob. He had a good attitude the rest of the day. There was a very nice spirit in our home all day, even until bedtime.

Sunday afternoon we watched Pete Seeger The Power of Song. It's my favorite documentary. We all can't help but love Pete Seeger. He is such an endearing man and a man of principle. He reminds me of Grandpa Alden, something about his frame and his eastern mannerisms. Did you know that he quit performing with the Weavers because the other band members wanted to sing for a cigarette commercial? He spent his whole career singing for school children and he didn't want to set a bad example for them. One of his grandchildren tells the story of a time when a man came up to him after a concert and said "I came to kill you tonight." It was during the Vietnam war, which Pete Seeger opposed, of course. Apparently, his wife, Toshi, told him to go talk with the man. He told Pete that his brother had been killed in the war. They sat and sang "Where have all the flowers gone" together. The man said he felt healed.

Monday was Labor Day. Rob had the day off. The kids had school. The trumpet was ready so we drove back into Beijing. We wanted to have lunch somewhere too. We walked in to several hole-in-the-walls but none looked good. I get spoiled by all the places that cater to Westerners. When I go to place that doesn't have pictures, English, or even Ping Ying I lose my courage. We ended up at a noodle place called Old Beijing. I wish I had had my camera to take a picture of the only dish I've seen Rob balk at eating in four years of life in China (excluding the silk worm congee.) This looked like a grey jello mold, topped with dry red pepper. It was some kind of tofu creation. Thank goodness there were two KFCs on the block, they had ice cream.

Tuesday I went to ISB to help Mary give her All about Me presentation to her kindergarten class. Check out the picture I took on the bus. ISB runs a fleet of tour buses. It's impressive to see them lined up together. 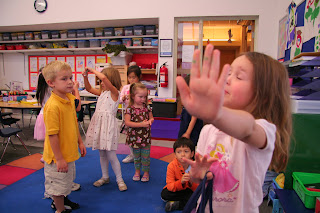 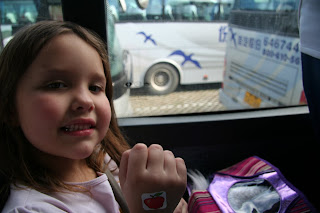 After we got off the bus, I went in to Jenny's and bought the girls some two kuai ice cream, actually I think we splurged on the five kuai kind. I heard someone singing "If I had a hammer." I looked around for Joan Baez. It was Bethany. I was so proud.
Posted by Megan Raines at 5:39 AM