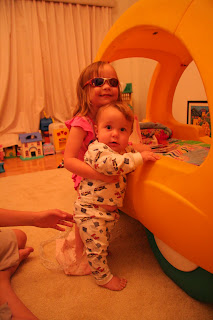 August was a rainy month in Beijing. When we arrived home from the airport, in the rain, Lao Tien was there by herself to greet us. She said that Xiao Chen had stayed home "with a very bad wasp bite." At least, that's what we understood. Xiao Chen came to work the next day limping, but she told us that she had fallen on her bike in the rain. Lao Tien said "it's because young people aren't careful."
Xiao Chen limped about her work for a while before I told her that she looked too miserable to be working. She spent the next week resting and going to the doctor for 'massages.' At least, that's what I understood from Lao Tien's gestures. We never really learned what the injury was.

By the time Xiao Chen returned to work, it was Lao Tien's turn to look miserable. I said "please don't come to work tomorrow, you look like you are going to die." It is hard for me to be emphatic and polite at the same time in Chinese. Lao Tien took a week off to rest, then decided that she needed to retire. We agreed. Lao means old and Tien means sweet and heaven and day,and probably a hundred other things. We miss Lao Tien, but Xiao Chen is doing fine on her own and only paying one ayi will help us save money for a house.

We spent our evenings at ISB last week, three nights of Back-to-School Night. I remember Back-to-School Night at Patrick Henry in Tulsa,where I attended all seven years of Elementary (unimaginable to my children.) I remember the teachers preparing the displays of our art work and my spiffing up my own desk to show-off to my parents. Back to School Night at ISB is disappointingly power-point-presentations-about-curriculum focused. But, this is my third and last year here, so I'll keep my thoughts to myself, my blog, and all the friends to whom I grumbled. I just go to breathe in the aroma of crayon wax and pencil lead, and because Olivia asked me five times if I was going because she left a note for me. I wouldn't have missed it, even though it meant enduring 'curriculum.'

On the second evening, I skipped out of the first hour of power-points and took a moment to read a magazine while I waited to meet Kyle's Chinese teacher. It was Yoga and Joyful Living. I read a segment of a lecture by a man named Rolf Sovik. He was speaking about "trustful surrender." He said, "This practice means that you do everything that you possibly can to grow and be happy, but also accept what is, and embrace life trustfully."
I've thought about that throughout the last couple weeks. Grant and William and I managed to take over Lao Tien's dog walking routine, at least a few days last week. One morning as William enjoyed his bottle in the stroller, and Grant and Cindy explored the bushes, I also took a moment to be grateful to be exactly where I was, looking at a pine tree, though not sniffing it, as Cindy was.
And other experiences brought the mantra "trustful surrender" back to mind. I felt happy about hunting down the source of the cat pee odor in Sam's room; the bean bags. So I took off the covers, not knowing that there was a hole in bag. The styrofoam beads fell everywhere. And, as I was 'surrendering' to the moment, Grant 'embraced' half the beads and scattered them to and fro, and poured milk over the others. I spent most of the day restoring the beads to their proper place, but, at least Sam's room smells nice now. It was a humbling experience.
Anything having to do with technology is humbling in China, living with internet censorship, praying that the virtual private network will work, running back and forth to the computer store with another virused computer, just deciding that working on the computer wasn't meant to be today, all those things help grow my humility and "trustful surrender."
Being a parent, but stepping back and letting kids grow the way they want to grow is also humbling. Sam and Ben had been wanting to audition for the middle school musical since last June. I was impressed when they started to sing along with my Brett Manning CDs. They both decided to sing "So Long and Thanks for all the fish" for the audition. I thought it would fitting since the musical this year is Seussical. We were all excited when Sam came home with the lead and Ben was cast as a Who. Sunday night I found Sam, upset in his room. He was uncomfortable with the part for several reasons. I told him he could make his own choice. Of course, I was a bit disappointed. By Tuesday, Sam and the teacher had arranged for him to switch parts with an eighth grader from our branch. Sam was happy and relieved. He still has a part that will give him good on-stage experience, with less pressure.
Last Saturday we took the kids to the embassy for a meet-and-greet barbecue with Ambassador Huntsman and his family. The new Ambassador is very kind and was gracious even when Bethany refused to shake his hand. We can't surrender to everything. Rob informed Bethany that she won't be invited to the Obama meet-and-greet if she doesn't learn better manners.

In other news, Tuesday afternoon, Mary decided that it was time to ride a two-wheeler, so refusing any more help from me, she hopped on the torn seat of the little lavendar, rusty-chained, girl bike that we inherited from the Goldrups, and rode down the street.
William pulled himself up to the car bed Wednesday night, making his own milestone.
Sam made an amazing batch of homemade pasta. 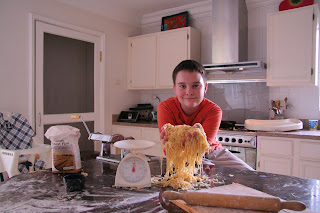 I think I've caught up to today, Friday, September 4. It's raining again today, a lot. I was grateful to spend this morning at ISB helping Kyle make paper-mache treasure boxes. Caitlin is playing with her friend Amelia. Grant is watching Barney and saying "Mommy, I cookie." William is playing with Sam's electronic drumset, so I should move him before it falls. I made pizza dough and snickerdoodles (Marion Pride's recipe.) It was a nice way to spend a rainy afternoon.
Posted by Megan Raines at 7:39 PM

Megan! You amaze me! I love to keep up with all that is happening in your family. Tell Sam and Ben congrats on getting parts in the musical! Way cool!!