anywhere but the kitchen sink

So, that Friday of the ISB assembly, in the evening, we had plans with the Sevys, movie and pizza night. I spent the afternoon cleaning the kitchen and bathrooms, trying to make the place presentable. Grant woke up from his nap just as I was finishing up. He woke up grumpy and kind of inconsolable, so I was sitting with him, in a kind of stupor, on the couch, when Pepper, the calico cat, had to chime in with her own demands. She wanted to go outside. That is a pretty reasonable request, but I was kind of busy in my stupor.

A few minutes later, Grant got lured in by one of his favorite shows, probably Sponge Bob Square Pants, so I went back to work in the kitchen. I walked in to find Pepper the Cat sitting like the Queen of Sheba in the middle of the kitchen sink with her tail propped up daintily. She gave me a cool glare, as if I were disturbing her privacy. Sure enough, I lifted her up to find a perfect puddle of cat urine. I asked her why she couldn't have used the guest bathroom, since I had also cleaned that within the last hour. Disgusting, I know.

I admitted to the Sevys that a cat had peed in our sink, but since they are our good friends they still wanted to eat dinner in our kitchen. We ordered out from a new restaurant called New York Style Pizza. At first bite I almost thought it might, possibly, be almost as good as Giovanni's of Santa Barbara. We get a little delusional in Beijing. I felt guilty because I had just developed a Friday night loyalty to friend-owned Tasty's. I promised to order some Tasty's pot pies the next week instead, maybe even some of their delicious rolls, or doughnuts, or bagels, any pleasurable way to justify my betrayal.

Less about food; I have mentioned to some of my blog visitors that I would explain more about Rob's new job situation. In November I wrote about my growing anxiety about Rob's Afghanistan assignment. (Planning the Next Step) Letting go of our full-time ayi last October helped me realize how alone I would be in managing the house, little kids during the day, and big kids' homework and activities in the night and on weekends. What's more, the State Department and Oakwood Fall's Church, the place I affectionately call the State Department half-way house, rejected our request to rent two apartments during Rob's year- long language training period, and renting and furnishing a house for eleven people is more expensive than buying. So we buy, furnish a house, and then we have a mortgage and rent when we transferred to Utah during the next year while Rob was away? It was looking like this Afghanistan assignment was going to cost us money. Not to mention the fact that we were taking advantage of an amazing group of kids who were willing to move three times in two years. And, we couldn't really know how Rob's absence would affect the kids or me emotionally. I was already losing hair and Afghanistan was still two years away! So, I found repeated opportunities to corner Rob and express my concerns

Rob agreed. Maybe he would say that he didn't need me to pester him, that he knew enough to stay with his family,all along, but he can always defend himself in the comments section. He called his CDO and in a week or so the assignment was broken without any difficulty. The same week a position opened up in Rob's current office, here in Beijing. His boss told him they would like him to fill the position for one year. He may do that, but it is not final. It needs to be opened up to other bidders and approved in D.C. Rob also has to bid on seven other positions, which will probably all be in the D.C. area, since other jobs abroad are more than picked over at this point.

Here are some pictures from our day. Tyler (Sora's brother, Sam's good friend) and our friends Luke and Patricia went with us.


The Village mall houses the Megabox. 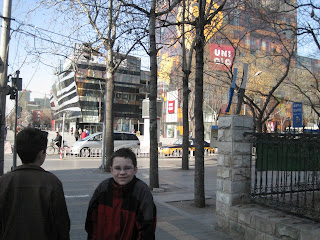 We arrived with plenty of time for lunch, thanks to Sam, who made a minute by minute plan for the day, and kept us on schedule. Mary wasn't too happy about being surrounded by those hats. 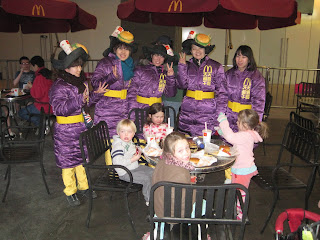 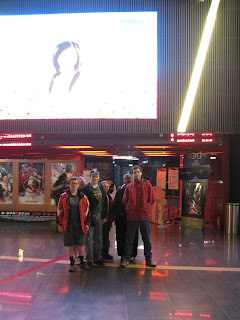