So you wouldn't guess from all my talk of the ten, the transitions, and my general neuroses that I lose sleep from time to time.  Sophie slept through the night at least twice last week.  I was grateful for that. But Thursday night I went to bed with the house so messy that I couldn't sleep.  I woke up about three a.m. thinking about the disaster downstairs and just questioning if I had anything in my life in order.  I thought about my parenting and how I do a lot of blogging about my myriad of weaknesses, but could I do something about them? Could I make our house more functional, calm, predictable?  Well you just have to start where you can start, so I went downstairs and started with the dishes, and moved throughout the house until the sun came up and it was time to wake up the kids. That was Friday morning.

But back to Monday morning, November 15.  We had kind of a late start.  Sunday night had been filled with our kind of regular irregularities.  It started to snow in the evening so the kids went out to play in it.  Then around scripture time Bethany opened the front door to check on the progress of the precipitation.  Just like out of Jan Brett, there was an unpredicted, four legged, guest at our door.  Roxie was her name and she looked cold and confused and insisted on coming inside. 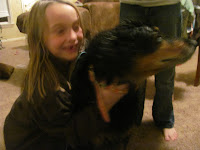 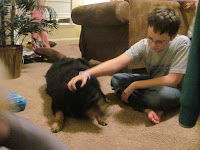 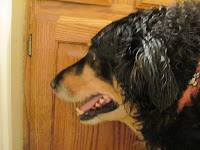 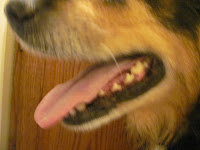 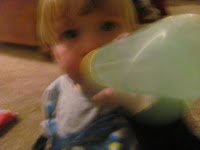 And what we looked like to Roxie.
So bedtime was predictably delayed with all the excitement of a new dog friend, who by the way, found her way home Monday morning.

So Monday I was driving Sam and Ben to school, imagining to myself that I was right on time for a change, when Sam started to panic...only five minutes to the bell. I started to smell stressed out teenager. How to diffuse? No Nacho Libre lines came to mind so I just said "Come on Sam, You gotta look at the half-glass full."

"Half-glass full? Okay, fine, but how's that supposed to apply to this situation, Mom?" he responded.

And I said, not wanting to be dismissive, just defusing, "It doesn't apply at all Sam."

Because now and then, when I'm trying to be a parent, things just come to mind randomly, and in this case it was Jon Stewart's Daily Show segment about Dick Cheney. Check it out...

I said," You know Sam, Some people say the glass is half empty and some say it's half full, but George Bush say that its a  "half-glass-full."

So then a miraculous thing happened... my van-full of stressed out middle school-ers started to laugh at my random interjection. That's when I thought that it was a moment so beautiful, so triumphant that I had to write about it.

Laughter is everything you know. I think everything is falling apart, and then two of my kids get together and laugh together, and it's all worth it again.

So I dropped the boys off at middle school and it was Caitlin's turn to get on my case. "Now we're late for my school," she said. "But don't drive too fast or we'll get under rested."

Just one more incidence of under rested. As part of my commitment to helpful blogging, and part of my desperate attempt to make up for some (ahem) overspending.  I am going to personally investigate the topic "Can you earn money taking surveys at home?"  So the other day I came across a new blog via blogfrog.  Here it is http://www.wahm-solution.com/  and from there I linked on to what seemed like a fairly credible review of work-at-home Internet options.  Did some reading.  Did some buying-into. Stayed up past two am Saturday night (fortunately we're on the eleven o'clock church schedule) Grossed one dollar.  Won't admit what I invested in case Rob is reading.  But I haven't given up...so more on this later.  I will let you know when and if I find something more remunerative...because I think we're all wondering.

That's all for now, since it's late again and I start to admit to things that  shouldn't.  Next post...the Deathly Hallows...
Posted by Megan Raines at 11:52 PM