Monday April 19, we were all back to school.  Did I mention that I love school?
Tuesday, I had my first introduction to seated massage.  I love it. It's so communal, energetic, aerobic, efficient.  I can't wait to buy my own chair.

Wednesday, two of my favorite classes.  Acupressure in the morning. I love studying yin and yang.  Wednesday we discussed the Earth element.  Do you know your archetype?  Mine were wizard/peacemaker.  Anatomy in the afternoon, finally to the muscles.

Wednesday after school, Rob's in town this week.  He came to pick up the kids. They were excited.  I had two days and a to do list longer than my arm.  After they left I went to friends house to practice reflexology.  She was going in to the hospital the next day to have her baby induced, her first.  It felt like a priviledge to be part of the night before.

Next I met a friend from school, Sophia--great name, at the mall.  We had cheeseburgers at Five Guys and then saw Source Code.  I enjoyed it but I can see why the boys weren't overwhelmed.  Seemed like a chick flick in disguise to me.  Bourne Identity meets While You were Sleeping. It felt strange to sit in a movie without kids.

Last week Sam asked me what was my favorite movie.  Hard to answer so here's a list of a few.

-Life is Beautiful and Cinema Paradiso-- for Italy, incredibly romantic but too heart wrenching to watch on almost any day

-Charlie and the Chocolate Factory-- the original, for admonishing

--Nacho Libre-- for serenades, wrestling moves, inspiration.  Friends at lunch told me they couldn't understand why I cry in the last wrestling scene.  Doesn't everyone???

Back to the next two days.  Thursday morning I went to the temple.
It was a blessing to have time to sit and pray and think.  Walked out in to a big windstorm. It felt like the last day on earth.  My feeling was that could be good or bad depending on what came next. 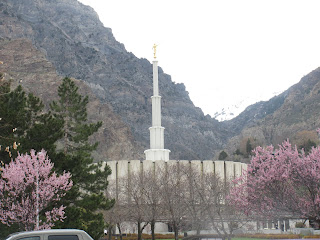 Thursday afternoon, started in to Sam's birthday list, had to have it interpreted by the guy at Best Buy.
Had business cards made.  Bought some shoes.  That's all?  Where did the day go?  Bought dinner at In-and -Out.  Over rated in my opinion. Not as yummy as Burger Supreme or even Five Guys.  Met my friend Gina to go to her DoTerra oil party. Interesting. I like lavender, melaleuca, frankincense.  The house felt so lonely Thursday night.

Friday morning, had a volunteer opportunity.  Our anatomy teacher took us to his kids' elementary school to do seated massage for the teachers.  Teacher appreciation week.  I loved it.  Loved being a part of making their day better.

Went back to shopping.  Easter and birthday preparation. Costco was a-buzz.  Brought home Smith's Chinese for dinner and old times. I went down to the Smith's in the hood for that.  Remembered what Amy said about the meat market in the frozen foods section.  Had to laugh when I smelled men's cologne wafting throught the aisles.  Smith's Chinese was on my to do list. Got that in.  William got home in time to eat my chow mien.  It was great to have his company again.
Posted by Megan Raines at 9:40 AM