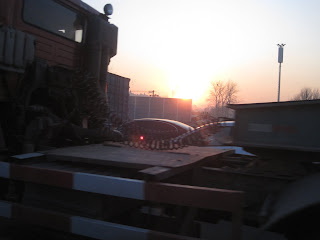 Wednesday, January 13, a driver from Beijing t.v. came to pick us up after school. More four o'clock traffic. The kids have come along way. Ben, Kyle, Caitlin, and Bethany rode for an hour "squozen" four in row in the backseat of the minivan, without a single elbowing incident. Mary and I shared a bucket seat and played I spy for the entire ride, at Mary's insistence. Ben joined in the game.
"I spy something that starts with global and ends with warming." He said. 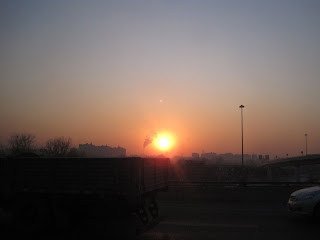 Mina met us when we arrived at the enormous BTV building... enormous and cold! The bottom floor has the auditorium and dressing rooms. It was our first night to practice on stage, and to really get some direction on our act. Up until now, its only been me, tyrannical stage mom, directing. How I wish I had more experience, knowledge, capability, in this situation.
Mina led our wide-eyed group through the backstage to the auditorium. I guess she was giving us a chance to soak in the atmosphere. Either that, or she thought the stage would be available and it wasn't. Here we are enjoying the Michael Jackson impersonator.. amazing dancing, though fewer gestures would be appreciated. 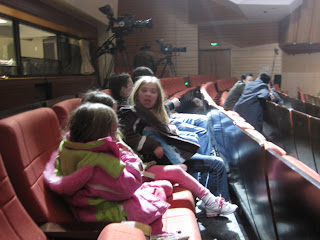 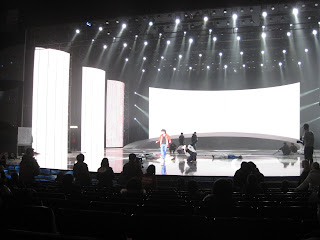 After Michael finished Mina and her assistant Jane asked us if we wanted to have dinner. I felt unsure how to answer because we had just arrived, and I thought we ought to do something before we took a break, but in China you have not understand a lot of things. The kids were apprehensive, because they distrust Chinese food, but we all agreed to eating. They took us on another journey through the cold halls, down an elevator, through a parking garage, up another elevator to a hallway of pleasant restaurants. We stopped in a sort of banquet room that was empty when we arrived, except for the staff and a long table of food. The room filled up quickly with BTV staffers, workmen in black parkas, and other groups of performers must be dancers, with yellow t-shirts and tight, pulled back hair-dos, as we ate.

We know that a free, surprise buffet is dreamlike to me. The kids were pleased with the food, which smelled and tasted delicious. Here's Kyle at the buffet. It's not a great picture because I was trying to be subtle. I do have some dignity. 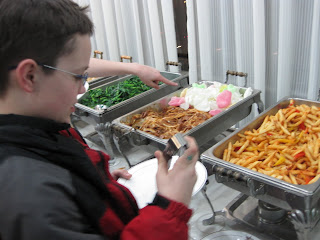 After dinner we changed in to our costumes in the bathrooms, avoiding the perimeters of the squat pots as much as possible. Only one pair of changed-out-of-clothing emerged submerged. Here we are, most likely in the middle of discussing the stage business, (which kept changing,to the kids' frustration) looking a bit scraggly.

How will we shape this up? Prayer? Intervening angels? I know they are among us! That is why we persevere. 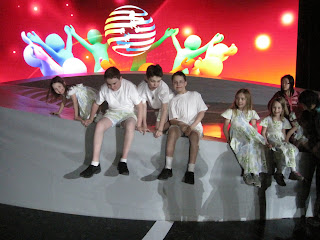