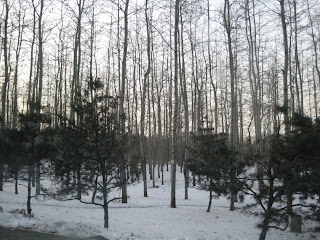 Thursday, January 14 Rob came home early so he could drive us to BTV. We gathered the kids up at ISB, grabbed some bagels from Tasty's and headed in to Beijing.
When we were on the third ring road I asked "Who can be the first one to see the pants building?"
Olivia said "What's so great about the pants building?" 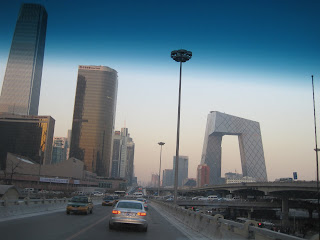 The pants building is the CCTV tower. Here is the hotel built next to it that caught fire last Chinese New Year. People are not sure what to do with it because it is on the same foundation as the CCTV building, so it cannot be razed. The fire was caused by CCTV's fireworks display. The hotel was empty, but at least one firefighter died. 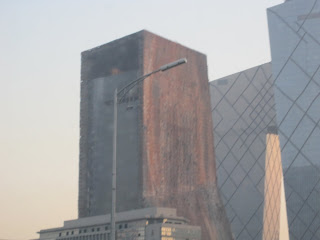 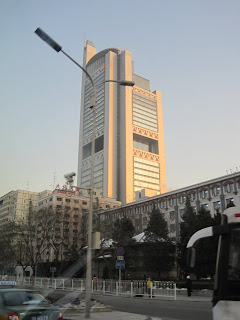 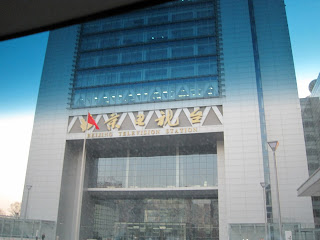 Our schedule was supposed to be rehearse, dinner, talk show. The talk show people wanted us to bring Grant and William. They were impressed with Grant when they met him at our house because he is "very active." Exactly why we wouldn't like to bring him to the station, but we did anyway. Jane escorted our group of big feet, little feet and strollers through the cold hallways and up and down stairs to the auditorium.
We sat down and and she told us that the schedule was "too tight" to practice on the stage that night. Maybe it was because we had arrived late and she didn't want to appear critical. But nevertheless, I told her if we couldn't practice on the stage then we couldn't perform in the show at all. Our blocking involved the stairs and we needed to feel more confident moving on them before we performed in front of an audience Friday night. We told her that we could skip the talk show, but not the rehearsing. I didn't want to go on TV talking about an act I didn't feel good about.
We reassembled our group, met up with a beat box/ cello group and moved again to the cafeteria, still not sure that we would be able to practice. The cafeteria was already packed. Kyle reported that there was one table available, "until Michael Jackson took it."
We ate at some tables in the hallway. After dinner Jane took us to the backstage in the auditorium. We hoped that was a promise that we'd be practicing next, but soon Jane returned and said, "Okay why don't we go upstairs now?"
"No," we said. "We'll wait here until we can practice."
Aside from my needing to manage Grant's interest in an igloo backstage, the kids were good about entertaining themselves while we waited. Sam found this Chinglish sampling. 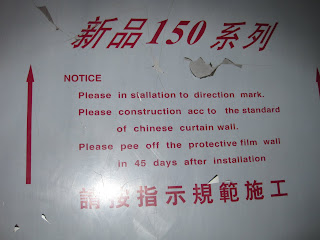 Here is the American cellist that we met. The man in front with the microphone is a famous Peking Opera singer. He sounds just like a high soprano. I really enjoyed their cello, beat box, Peking opera fusion. Caitlin was dancing along backstage. William listened from his stroller. 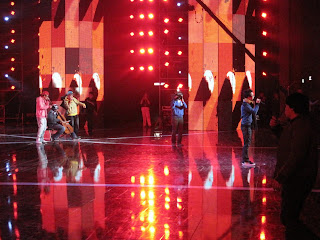 We were glad that we insisted on practicing. After the fusion group, no one else was waiting. We took our turn. We all felt better about the act and we still had time to make an appearance on a studio audience talk show that was being filmed on the second floor. 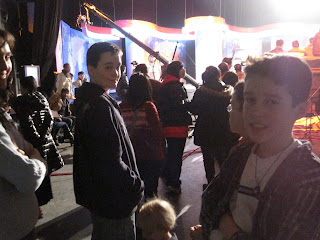