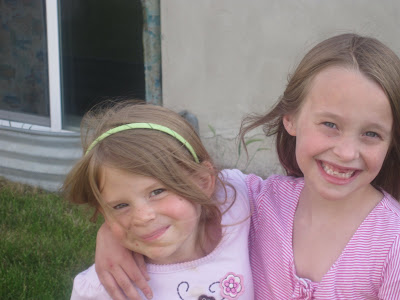 What becomes the inevitable foreign service life reality? Summer in the in-laws' basement.


Saturday evening, Utah time, we arrived like zombies, appreciated the airport reception of family from both sides, loaded up luggage and children in a variety of vehicles, ate our traditional homecoming meal at the Del Taco with the becoming a bit too small for the all of us play area, and headed home to the see if we really could fit in the basement for a month and a half.


Saturday evening I was too tired to be skeptical, and too tired to be optimistic, as I mechanically moved through the twelve or so suitcases to sort out what clothes and toys were needed for our time there and what could stay tucked away in the storage closet, that pleased me greatly to make use of. I have never felt more relieved to see empty, welcoming dresser drawers, light at the end of my tunnel of fear of clutter.


I was tempted to climb in bed before seven, but the sound of the phone ringing and Rob's voice revived me, and after that Sam convinced me to take him to Wal-mart, since I had forgotten his church clothing. Wal-mart means we have re-entered.


Sunday morning was our first visit to Grandma and Grandpa's ward. We talked to the leaders about Ben, who has just entered young mens and will need to be ordained as a deacon. The boys learned of a Super Activity this week that involved twelve-year olds too..more about that later, and Grant screamed "I want more bread!" during the sacrament, maybe it was because we have been too late too often and he doesn't get the point, or maybe it was the good American bread that prompted the outburst. I ran from the room with William and Mary too. When the water arrived in the foyer, Grant looked at it stubbornly and demanded more bread. That prompted the earnest deacon to go back in and get more bread, which I tried to refuse, but Grant went tearing after the deacon. I was secretly relieved when Mary found a stray piece on the floor, preventing Grant's attempt to chase the deacon in to the chapel.


Sunday afternoon we all slept. In the evening the cousins came for dinner. Grandpa served us his should be prize winning lettuce from his garden, among other things. 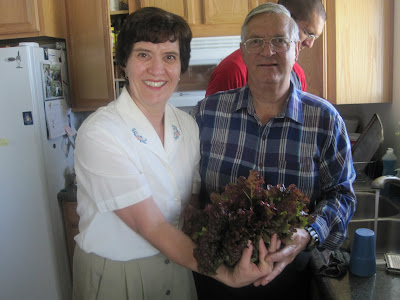 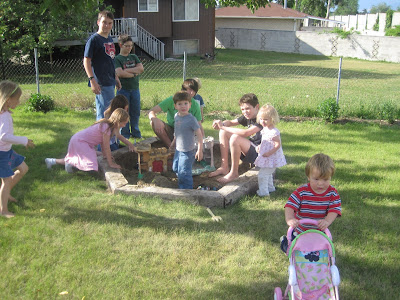 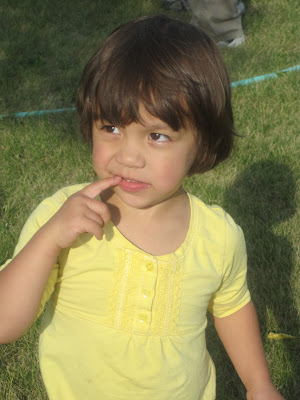 I started to feel human again, and even optimistic. Maybe it was the clean air and comfort of family. 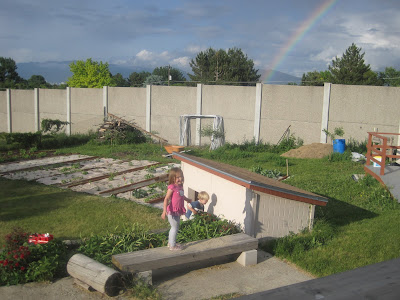 I love these meals together in Grandpa and Grandma's carport. 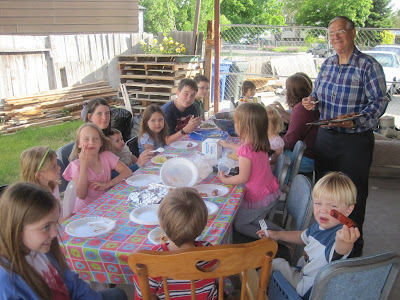 Glad to hear you made it home and are enjoying being with family once more.

I'm missing playgroup though...didn't seem like a Thursday without it!

I'm glad that my boy isn't the only one who loves playing with a stroller!