Olivia said, "Sophie looks like she needs to grow into her skin."

Ben said, "Babies sleep so much. I think Sophie has only been awake like ten times in her life."

And someone started calling Sophie "baby burrito," not because she's full of beans, but  because they wrapped her up so tightly in the hospital.   I can't even get a tortilla that tight....so maybe, for Sophie's sake, that nickname won't stick.

Sunday, September 5, the kids went to church and sat with Granddad, as usual.  The big boys came back in time to take Grant and William to nursery so Sophie and I could sleep.  Our friends, who fed us last Sunday as well, brought over a delicious pot roast, and Grandma and Grandpa stopped by in the evening. 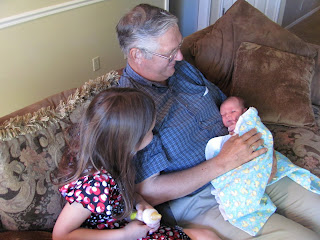 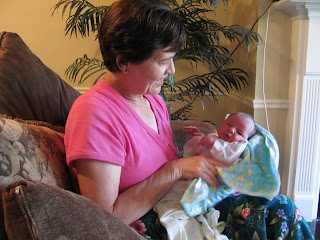 Grandma's first time to meet Sophie.
Monday  morning, Labor Day, I took Sophie to the lab for a billirubin check then ran to Lowe's for some more mums and Smith's for milk and other stuff.  When I got home Sam was making breakfast.  I thought his biscuits looked quite professional. 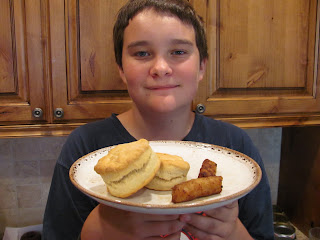 What to do to get out of the house.  It was an absolutely gorgeous day, but the kids said no to a picnic.  They'd been wanting to go to a particular McDonald's indoor playground in Spanish Fork for about three years, really, so off we went. 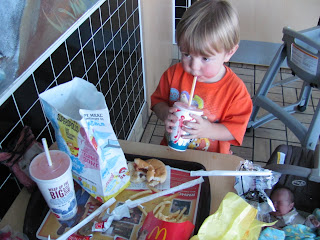 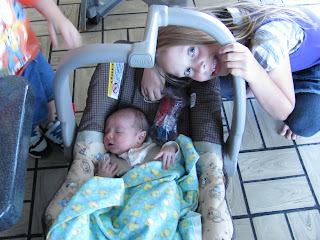 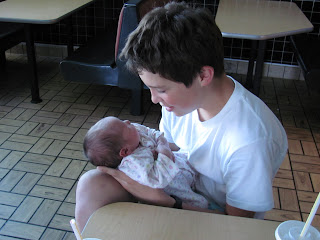 Monday night my Miller roommate Carrie came by to visit. It was great to see her and get caught up on her life. 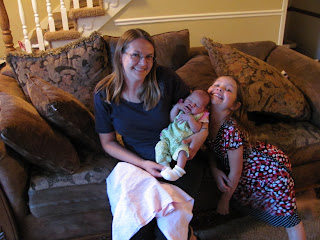 She brought me these beautiful flowers. They were so big that I had to lean them against the wall.  See that clock. That's something I like about living in other people's homes.  I wouldn't even know where to go to get a clock like that, but I like it. Looks a bit crooked though.
Tuesday, two incidences of bad mom moments...first I was buying top soil at K-Mart, had to drive the cart over a the divider between the garden section and the rest of the store, went too fast and Grant went flying out of the cart, and bumped his head. I felt awful. The top soil smelled wonderful in the van though, like the beginning of rain, so I left it there for several days.

Next bad mom event, also involved Grant...we'd just arrived home from picking up Ben from play practice. I was aware of some scuffle in the back but not prepared to turn around and see Grant's face looking like 9/11. Blood running out his nose, in his mouth, all over his hands. I was horrified, thought it was a delayed reaction to the flip out of the cart. No, turns out a female sibling, who'll go unnamed, threw a booster seat at his face. Just another example of love at home. I went tearing around in hysterics, certainly making a bigger scene than the bloody boy. Like I said, a bad mom moment. Was glad when Tuesday ended.

One day last week, got a tire repaired at Pep Boys. Didn't know it would be free, what a blessing.

Another day, bought this flag for the front porch. The kids made fun of me. 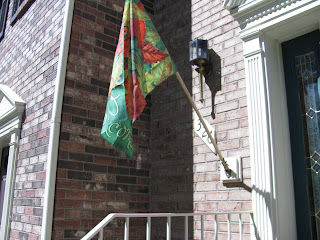 I love the look of flags, or the sound of chimes, any kind of interacting with wind thing.  Makes me think of Maine, like the look of laundry blowing in the wind.  Why do so many people in Maine dry their clothing outside? It's a Maine thing, and a bit puzzling too since it rains so often in the afternoon.  Seasonal flags are a Maine thing too.
. 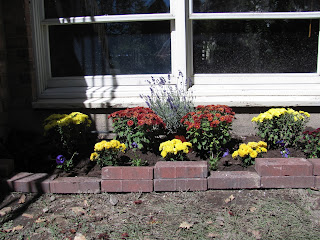 Saturday morning I finished the flower bed.  Later Bethany and Olivia came and filled rocks in where there were missing bricks.
In the evening we had a barbecue with my very first roommate at BYU and her family, over at the park. Our kids enjoyed each others' company. I hope we can get together more often. 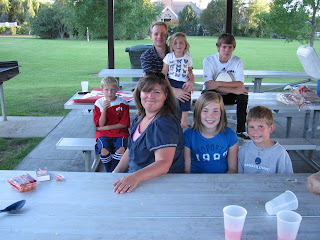 Dear Megan - It's me, Kim Battistone, from Beijing. I have missed seeing your lovely face around River Garden. But, I have been keeping up with your summer and arrival of the new baby (beautiful!). I love her name :-). Just want to say I have such admiration for you. I have 2 children - would like to have had more - but it was not to be. That said, I think 2 turned out to be the most I could handle, and they are older now and it is easier in ways. However, I envy you - in a good way - for all of your lovely kids, and I have to say, YOU LOOK STUNNING. In the photo of you with the baby, it looks like you are a pretty visitor, and not a mom who just had a baby! Also, I love your flowers and the flag. I, too, love wind chimes, and other things that make "wind" sounds. When we lived in Geneva, we had a huge cornfield behind our house, and I would sit outside and listen to the corn rustling. It was a lonesome sound, a wonderful sound. <3. Anyway, I am glad you are finding time for soulful things (planting flowers), as well as taking care of your family. I think flowers - either planting them, or putting fresh ones in my house, always kept me going through times when my life was hectic, and now my daughters have taken up this notion, too. So....stay well. Miss you, and congratulations on your lovely new daughter.

Hi Kim! How wonderful to hear from you. Thank you for your sweet comments! And what a romantic YOU are to sit and listen to the lonely sound of wind in the cornfields! I used to love the cornfields in Northern Italy too.
I miss River Garden very much. It was great to walk down the street and meet so many interesting and kind people like you. Take Care!
Megan