Monday, July 26 I was determined to get my first batch of suitcases out of Grandma's basement before all the Raines siblings arrived for the reunion.  Thankfully I had started packing the Thursday before, as packing always takes exponentially longer than I think it will.  The boys helped me drag suitcases up the stairs.  It's funny how no matter how much I reduce my stuff, it always feels like a relief to reduce more.  The basement felt lighter with five or six suitcases gone. As we were piling kids in the van, all the helpers (and even those who were less helpful) got a lollipop from Aunt Bekah.  I noticed William's hands and had to think how life is humbling. I have to love these  lollipop hands. (Look closely) 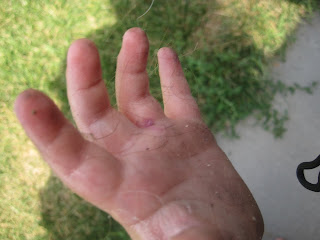 We drove down to Granddad's house, where we'd planned the drop off, but since he was out at the time of our arrival, owing to our being three hours later than intended, we decided it was the day to pay our respects to Diego's...not our friend Diego's house as Grant hoped, but the Diego's Mexican restaurant of our family tradition.  When Diego's was east of Center Street, back in The Day, my roommates and I would walk there for the monster sized nachos, the chicken is not good, always get the shredded beef.  My husband and I  went as well, as poor students. It was a meal we could count on for six dollars and one cent, assuming we shared an order and a large Hawaiian punch.  If you don't share, you don't forgive yourself afterwards. 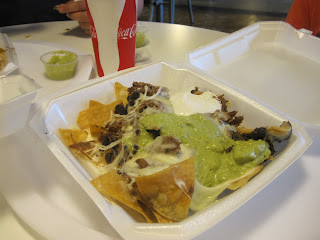 I have to buy like five of these now-a-days.
Sam won't believe this, but when I was pregnant with him I couldn't stand a thing about these nachos, especially the sour cream and the way the lettuce got a little cooked in the box. I'm glad I stopped having food aversions after my third pregnancy. 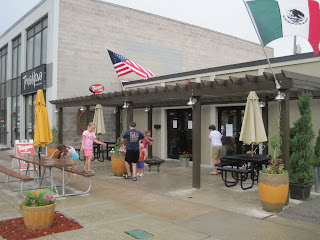 Here's the new Diego's, west of Center, doesn't hold the same nostalgia as the old for me, but west of center is better than right of center, so we still embrace it as familiar territory. How much can I write about a taco shop?  The old place was like a cross-roads, a place I'd frequently run in to friends visiting from California. Well this new location, which had doubled in size since we last visited, a pleasant change for our large family, this new location has the distinction of being the last place I ate, in December of 2008, before I went in to labor with William. He seemed to sense the significance of the place. Don't you think? 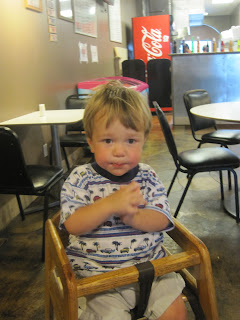 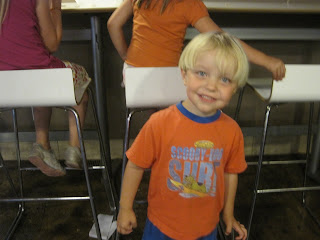 Grant gets excited about free refills 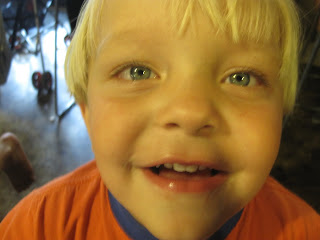 and seeing close-up pictures of his face.
As we left it was raining. Mary and Olivia wanted to be "singing and dancing in the rain." Olivia has never been able to keep herself inside during a rain shower. 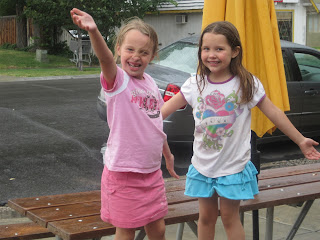 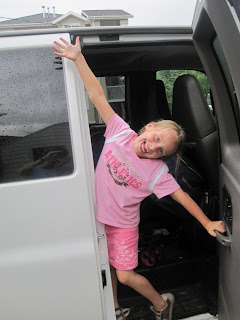 This was the pose Olivia insisted upon.
So to pass a little more time I took the kids on a little tour of the place. They actually cheered at the suggestion. That was unusual. 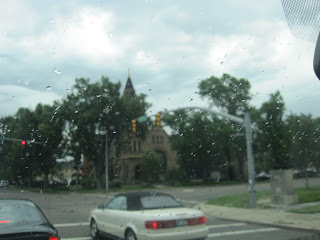 I first pointed out the old Ivy Tower, now a private school I believe, and told them about my days in the alternative room, the soul room, most often shunned the top forty room, but on occasion couldn't resist. How long ago was that? The kids seemed unimpressed and almost as if they'd rather not imagine me dancing. There were things I liked to do before I was perpetually pregnant. 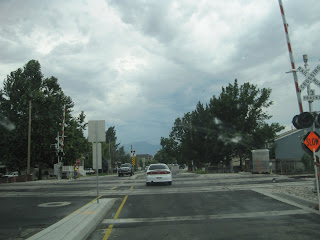 And here are the railroad tracks that I was crossing with a bunch of milk and cereal from WIC, so I had no free hands, when I was pregnant with Sam and dutifully wearing a pair of bright, very bright blue, stretchy, homemade by my mother-in-law, maternity pants that at that moment on the tracks decided to give way to the broad curve of my belly. 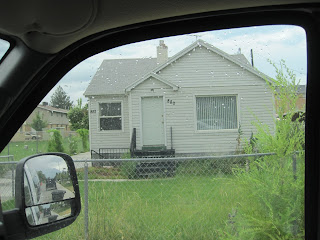 And here is the little house where we lived (in the basement) when Sam was born. Lola was our landlady.  She must have passed on by now. This basement smelled pleasantly like mold and the cheap cinnamon candle I tried to mask the mold smell with.
Last site on the tour I made the mistake of driving the kids by Seven Peaks. That will haunt me. (Not pictured.)

And then we played at the kids' elementary school,and it was a really nice afternoon that stretched into evening, because it was too nice to leave, even with the light rain that was falling. After all that we made the drop-off at Granddad's and headed back north.
Posted by Megan Raines at 3:38 AM

Diegos!!!!!! I ate my fair share of those nachos and I think once or twice you and Rob! I must return to Utah and and eat at the new place but the nachos still look the same!

Thanks for the trip down nostalgia lane. . . .

We'll be waiting to go to Diego's together again. We hope it's sooner than later!