what I never knew about sea slugs 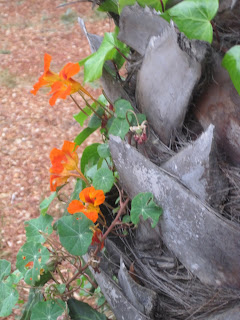 Wednesday morning we woke up to Santa Barbara's only flaw, what Amy referred to as "June gloom." The air was chilly and wet, with clouds and a bit of drizzle. I went outside early, before the kids woke up, to clean out the van.  I love to admire the vegetation in Santa Barbara.  It springs up so spontaneously and with such variety. My mom always knows all the names of the flowers and plants. I wish I did. 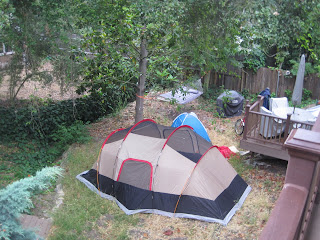 The Mills have the perfect yard for a camp out.  Sam set up our new tents for the kids who wanted to sleep outside.  When everyone was awake we got in the van.  I decided to drive around for a bit, just to use time, as we let the June gloom burn off.  The beach was our real destination, but it was still too cold. Amy's house is near the Mission.  Courtney loved it and Sam was intrigued because it reminded him of Vertigo,  but we agreed that we weren't ambitious enough to take the kids in for a tour.  Next I drove towards Cabrillo Boulevard via State Street.  I had to explain the concept of "cruising State" to the kids...to be young...wouldn't it be great to have so much free time again? 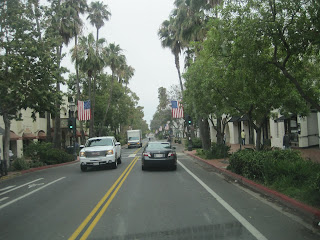 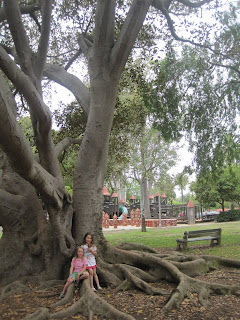 After Cabrillo Boulevard we turned up Milpas so I could be nostalgic about all the places where we ate lunch off campus.  Then I tried to pretend like I hadn't gone out of my way to drive by my high school, as to not annoy my children, who were unimpressed.  It was the closest I'll get to my twenty year reunion.  Then we drove up to Kid's world park. 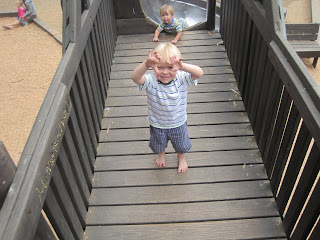 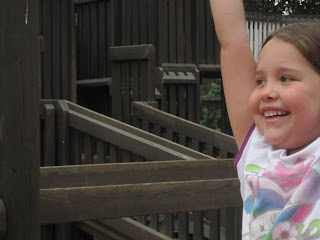 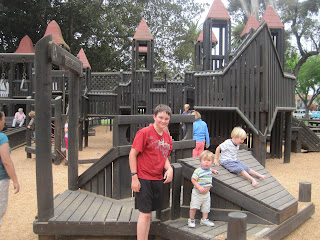 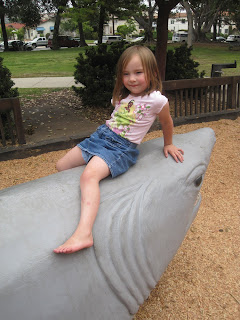 We drove to Goleta next. Stopped to buy towels and beach stuff at Rite Aid, saw that the Thrifty ice cream cones are no longer anything to feel thrifty about. I was bemoaning that fact to Sam, when a cute elderly woman in front of me turned to agree.  That was gratifying. What did they used to be? Fifty cents? We bought stuff for lunch and finally it was time to head to the beach, Goleta beach this time. I like the playground and the pier. Usually it is fun to walk down the pier and watch the fishermen, but I wasn't that energetic, feeling too pregnant and unwilling to lug William the whole way. 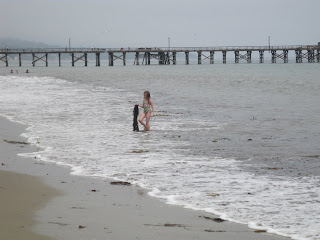 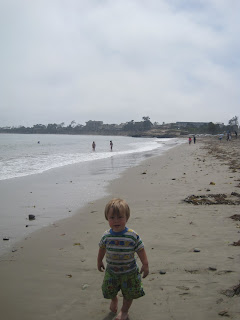 There's UCSB in the distance. 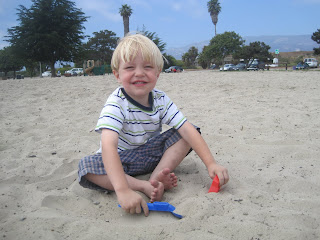 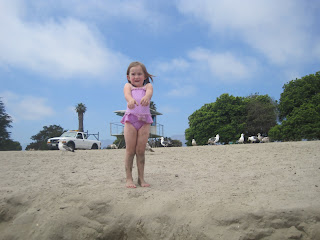 Caitlin wanted me to hold her because she was afraid that "the birds would peacock her." 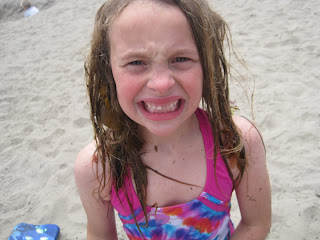 Olivia was attacked by seaweed in the waves. 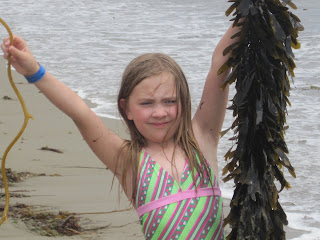 So here's the star of today's post. The kids tried to convince me we should bring this guy home as our new pet. A passerby told us he was a sea slug, I wouldn't have known. The kids were fascinated. 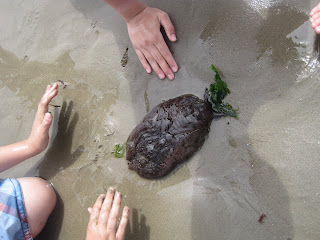 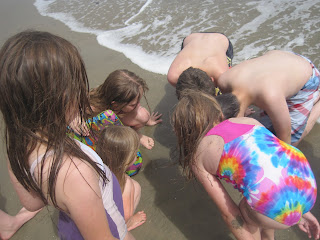 And speaking of he or she, Courtney did some googling about sea slugs and learned that they change gender when they're left out of the water too long. I hope we didn't do any permanent damage.

After swimming, the kids enjoyed the playground at the beach, we did some more shopping for food for the trip home, then met Amy to buy dinner. 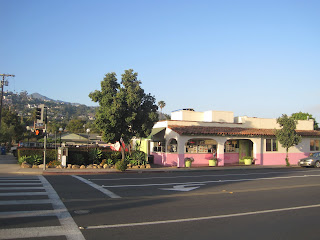 I was interested in this little shop on Milpas called Taco El Refugio. The pictures in the window looked delicious, but the price was too high per plate to feed so many. I had to find my taco refuge at "the bell" up the street. The kids were just as happy. We had dinner at the rose garden in front of the mission. 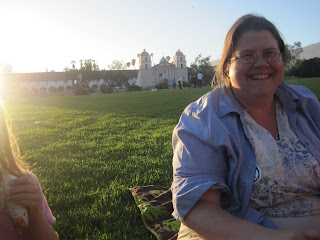